Miss Saigon is an old-style epic theatrical experience based on the Puccini opera Madame Butterfly. The story is slight but the staging is lavish, with huge complicated sets rotating and manoeuvring  to make scenes from Saigon, Atlanta, Bangkok and Ho Chi Minh. Whoops, in an Istanbul-is-Constantinople type way, Ho Chi Minh is Saigon. A helicopter lands on stage at one point with remarkable verisimilitude, including carefully synchronised buffeting of the audience’s hair from fans to increase the sense of the rotors flying overhead. Unfortunately this impressive effect is lessened when the chopper takes off again and reverses upwards like an airborne delivery truck. You half expect it to start burbling Warning, this helicopter is reversing. 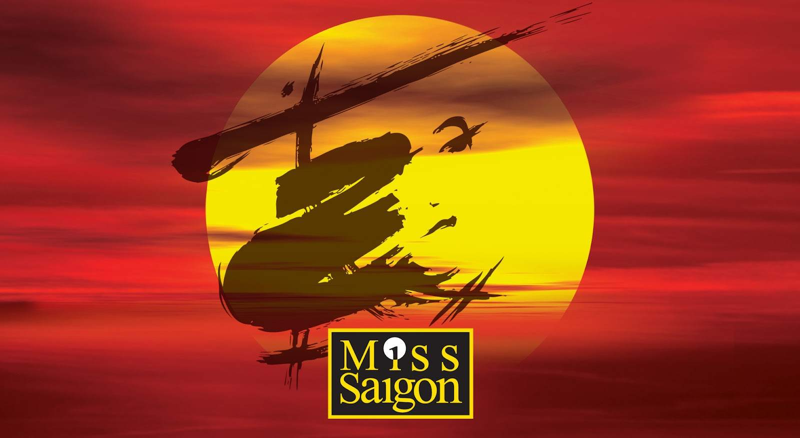 The play becomes most interesting after the interval when a projection of what appears to be real archive footage introduces the concept of Bui Doi.  Before then it is a drawn-out love story concerning a Vietnamese girl forced into prostitution and an American soldier. Kim and Chris (played by Eva Noblezada and Chris Peluso) meet in a brothel ironically called Dreamland. The neon name shines over the exploitative exploits of the pimp and the visiting soldiers, a scene in which the play’s take on the action depicted is at best equivocal.

The archive footage shows abandoned children and their rusty cots in institutions in Vietnam. Bui Doi translates as the dust of life, referring to the children left behind when the US army left Vietnam. The fate of these children inspires the rest of the show, with Tam, the child of Kim and Chris representing the thousands of real-life children left with no father or no parents. As the programme notes children suffer in all conflicts. Vietnam has been replaced by Syria, where it is estimated more than 1m children have been made refugees. Part of the proceeds from the current performances of Miss Saigon are being donated to Save the Children to help children caught up in conflict.

Back in the theatre the lighting is excellent, making dank slums come to life and adding excitement to the many dances. Jon Jon Briones plays the unlikeable pimp The Engineer with a charm that explains the character’s success. The complex set is best when it becomes the gates of the US Embassy. Changing quickly from inside to outside it shows the disappointment of those left behind.

Miss Saigon originally played for over 4000 performances between 1989 and 1999. The current revival is scheduled to end in 2016 so get booking if you want to see a lavish production that, though overlong and simplistically plotted is a good example of what a large, well-resourced West End musical is like.

I booked my ticket with the new TodayTix app.