English music festivals are generally held in the rain in the middle of muddy fields. Things are more sophisticated in Switzerland where the Montreux Jazz Festival provides for those who like music, but prefer hotels to camping and Lake Geneva to Glastonbury Tor. It is one of the world’s great cultural festivals, with music of all genres joining the jazz on the official stages and the growing fringe. As proof it is not just another festival, its audio-video library is deemed so important that it is on the UNESCO ‘Memory of the world’ register. 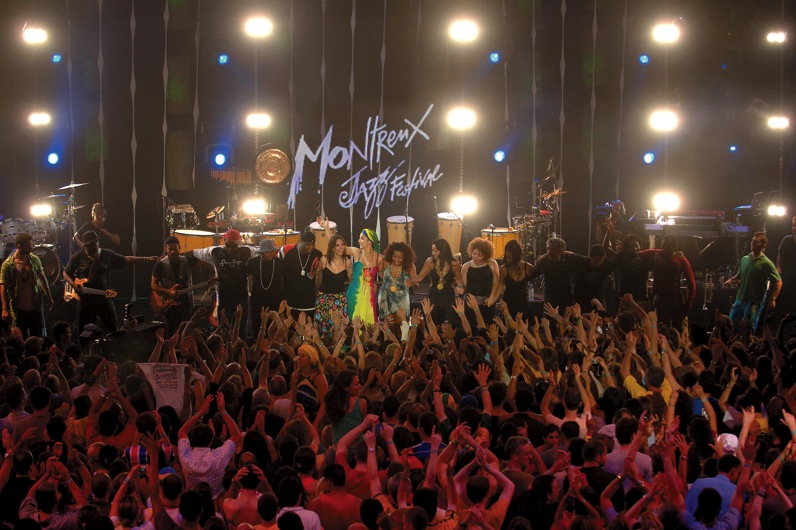 Montreux doubles its population during the festival. Most events take place by the lake and the lakeside promenade has a fantastic evening atmosphere as music bursts from different stages, temporary restaurants sit over the lake and people bustle past the street food and watch the free bands in the parks.

The festival is not just about music. Search the main 2m2c theatre complex and you’ll find a large Keith Haring wall-piece from the Eighties. This year there is also an exhibition of wild rock photography by Neal Preston. Preston is based in LA and is famous for his documentary images of musicians, both on stage and behind the scenes. We all came out to Montreux is a show of mainly black and white shots of the big stars of the 70s and 80s from Alice Cooper to Frank Zappa. Not all are guitar strumming heroics, there are thoughtful shots of the stars interacting. Clapton picked out of pure black is particularly noteworthy, whilst Freddie Mercury at Live Aid shows the physical effort it takes to be a live star. 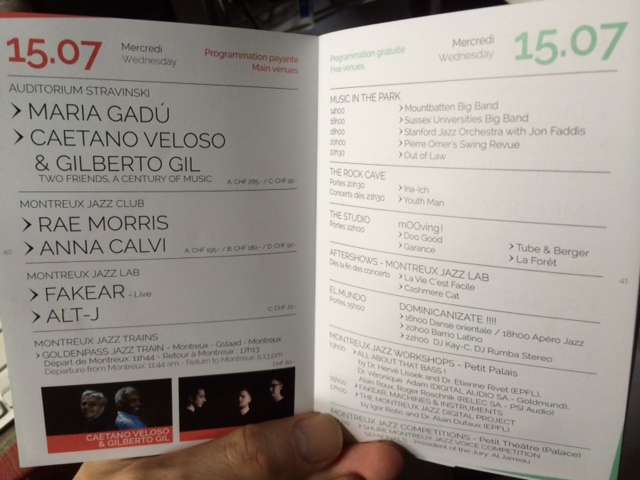 An example of the sheer number of events on every day

Of course music is the festival’s heartbeat. There are straightforward sets by international stars, but Montreux forges connections between artists with never-seen-before duets and collaborations. Many of the shows are free – in the image above the left-hand side concerts have to be paid for, but the long list on the right are all free. I saw a lively audio-visual set by Manchester band Alt-J in the Jazz Lab, whilst a crowd of 4000 in the main auditorium enjoyed the guitars of Caetano Veloso and Gilberto Gil. Big names seen in 2015 include Tony Bennett, Lady Gaga, Paolo Nutini, Lionel Richie, Sinead O’Connor and several more.

Founded by Claude Nobs in 1967, the Montreux Jazz Festival has grown enormously but still retains a small-festival atmosphere, with most events close together and easy to walk between. Like the Edinburgh fringe other venues have sprung up around the main venues, and just wandering around will introduce you to many different musicians. Stay out late, take the Pyjama bus home and enjoy the laid-back lakeside vibe. 2016 is the 50th anniversary edition of the festival. It’s going to be good!

More details of the Jazz festival

The Flaneur flew with SWISS airlines to Geneva. Book tickets and find other destinations here