France is the country that receives the most foreign visitors in the world and amongst its many attractions is one you might not have heard of. In the top ten of French visitor attractions – amongst the Louvre, Monsieur Eiffel’s tower and Versailles – is the aquarium Nausicaa.

Nausicaa, located in Boulogne-sur-mer is one of the largest aquariums in the world – its tanks and pools contain 4.5 million litres of water. It has been recognised as a Centre of Excellence by UNESCO and is named after the girl in the Odyssey who cares for Odysseus after his shipwreck on Scheria. This suggests that it has much broader aims than merely displaying fish, and that is definitely the case.

Nausicaa’s ethos is that the the oceans are vitally important and that the lives of everyone on the planet depend on life in the sea. It raises public awareness about the need to act responsibly, maintain the world’s seas for the future, and includes a research centre, a breeding establishment and an educational facility.

That’s a lot of fish. Two and a half hours are suggested for a visit, but there is so much to see you can easily stay much longer amongst not only fish, but penguins, sea lions, turtles and other exciting animals that you don’t often see being taken for a walk in the local park.

The centre has recently opened a new exhibition. Taking six months to build it recreates life onboard the Thalassa, an oceanographic research vessel. Fishing is vital for Man and this exhibition demonstrates one of the frontlines in the sustainable management of the oceans.

Once you have passed the entrance of the exhibition you are in a recreation of life onboard the French research ship. Whirring motors hidden under your feet make the grey anti-slip floor throb. Large video screens show film shot at sea from the real Thalassa. Carefully placed to continue the illusion that you are on board, they show such as nets being winched aboard and the bleak sea in which the vessel sails. Other videos show life inside the ship, and the work of the crew, as the fish are conveyor-belted into a room where scientists measure them and conduct studies. More screens also explain other aspects of oceanographic research, telling how little we still know about the deep seabed and important ecological balances.

The most realistic part of the show is the mock-up of the captain’s bridge. This has real-life footage of storms projected onto the windscreen. The floor has been animated, moving in time to the visuals and giving a very realistic experience of being on board during a force 10 gale. (My own experience of being at sea in force 10 gales is nil, but scientists from the Thalassa have visited the exhibition and judged it so). Pitching and tossing around the ship’s bridge is a great draw for children and adds to an exhibition that is a very interactive way to understand something of the oceanographic work of IFREMER (the French Research Institute for Exploitation of the Sea). IFREMER voyages are vital as they allow for more accurate assessments of the the oceans’ resources, which leads in to more effective fishing policies.

Other areas of the centre are devoted to particular animals and subjects, such as African penguins, sea lions and coral. Until the end of the year there is an exhibition focusing on life on islands. Not islands in the large Great Britain sense, but the small states that are vulnerable to the encroachment of the sea, such as the Maldives.

Like micro-continents these small islands face environmental, social and economics challenges. Their plights can not be ignored, the rising sea levels they face now could affect the mainland in the future. The islanders’ reactions to the issues are important and could affect policies around the world in the future.

As well as all these special exhibitions there is the small matter of the fish. These are all displayed with French and English signs that tell of where they come from and what they are called. It is a comprehensive collection covering all of the world’s oceans. Of course they have brightly-coloured exotic varieties that make you go wow; but they also have cod. More than 140 sharks can be viewed in tanks with glass walls. 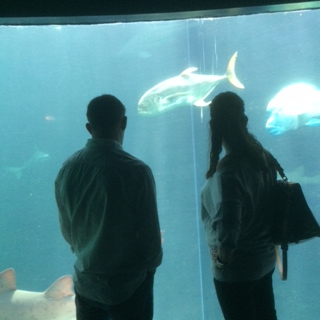 You can’t touch the sharks, but there is a new Touchtank, where less bitey species swim and you are allowed to stick a hand into the water and experience what a stingray (for example) feels like. Surprisingly tough is the answer.

Nausicaa highlights that the oceans are not inexhaustible. It raises awareness in a fun environment that children love, allowing visitors to see fish and animals that are rare and unusual. If you spend a day here you will learn much about over 1000 species of marine life and the role of the oceans in our lives. You’ll also see some very unusual fish that’s not on the menu at your local chippy. Or if it is, it shouldn’t be.