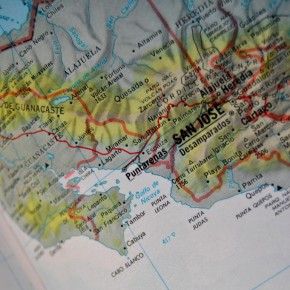 Seemingly eons ago I resolved to become a sort of neo-nomad; traveling the world, living in different countries, endeavoring to see as much of the planet as possible. Basing my romantic notion on the gentlemen travelers of the 19th century; writers, poets and artists, their excursions and adventures (though unfortunately I receive no annual salary from a wealthy uncle) I set off … and the journey goes on. At times a difficult way of life: no family, no career (instead many) and essentially no one particular place to call home – sacrifices I take in stride when I think of the adventures, experiences, places, people and cultures I have witnessed.

Anyway, my philosophical ramblings aside, I take you to Costa Rica – a jewel of the tropics – its facets and flaws.

It was one of those ‘bucket list’ things: to choose a destination by random, by spinning a globe and going where fate would take me (ok, first spin was North Korea, prickly logistics!) and a couple weeks later I landed in San Jose.

Costa Rica is certainly a stable country, a neutral republic, without a military, its social system and infrastructure in place and a quality of life comparatively higher than its neighboring countries. Nevertheless CR is still considered a developing country, therefore not bereft of certain… innuendos.

Initially a scouting mission only intended for a few months I wound up staying in CR for two years, mostly in a quiet Pacific beach town, but the first 3 months was an often wild ride spent living in the urban rodeo of the capital of San Jose.

If one knows not a soul in said destination it is always smart to book 2 nights in a hostel online before arriving. I recommend historic Barrio Amon; a nice choice, centrally located with plentiful accommodation.

Airports, the ever far-flung locations require transport to and from the city, often costly, always a potential rip-off! This is where you begin honing your bartering skills – stick to your guns on price (no more than 20 USD, though I have gotten away with 10 bucks), pretend you know your way around (declare exact destination), and try not to act like an arrogant Gringo! (live with it, you are a Gringo, it’s not always derogatory). Taxi’s are cheap in the city, are metered (though better to set a price), and absolutely essential at night!

Most people are in and out of San Jose on their way to coastal or mountain regions and calmer, quainter pastures. But for an urban experience San Jose is just that, an experience. It’s smoggy, dusty and chaotic and has its share of touters, prostitutes, dealers and swindlers just waiting to relieve your gringo ass of a few bucks. Nevertheless most everyone seems really happy and friendly, there are picturesque colonial quarters to saunter, plenty of museums, cultural spots, shopping and squares filled with vibrant social activity.

Nights not for the faint of heart

As the dark closes in certain quarters go through a metamorphosis; like being in an oddly real Tarantino film. Prostitution is legal (controlled by regulations, health board, social etc.) and rampant, being widely tolerated (men, don’t wonder why so many women are ‘attracted’ to you) and unfortunately unavoidable except in few places. Go dancing at the hotel bars, meet locals at a tiny bar, or hook up with other gringos for some inside information at any number of locations. Small clubs abound as the night gets into swing (…a bouncer armed with a pump gun asks me to check weapons at the door… weapons?) but the later it gets the more reason to take that taxi. Groups of rowdy and often armed transvestites hang around certain corners attempting to lure drunken, unsuspecting johns into their web – venomous even among themselves these guys’ cat fights entertain passers-by with a sick sort of ‘schadenfreude’, often ending in bricks to the head or slice-ups. Working in packs, with adept pick pocketing skills these humans are sure as sin the queens of the night on the nocturnal street-scene of San Jose.

Many choose however to stay in their hostel or hotel (usually gated and fenced fortifications!) for safer drinks and dancing with like-minded travelers – but don’t expect to meet any Ticos (Costa Ricans) or experience some hot San Jose flair. On the whole, staying relatively sober, carrying little cash (and not flashing it or expensive gadgets), using taxi’s and not acting like a total idiot should make for a safe, fun and interesting night out. I witnessed some dodgy scenes, but staying smart, never had any problems that scathed me. Oh, a tip for anywhere: Make a laminated, card-sized copy of your passport to carry with you, leaving the original somewhere safe!

If like me you have a taste for immersion (and adventure) then stay a little longer and get a feel at the pulse of urban Costa Rica. After a few days you will come across some of the same Expat faces, some you may choose to avoid, but most are happy to share valuable pieces of advice that will come in handy: rooms for rent, jobs, various sundry information like obtaining a mobile phone (only for Ticos, or foreign retirees, married gringos) or the best dentist (quality dental-work is cheap) to buying property (be very careful on this, as many will explain). Meeting Ticos on a non-tourist basis is also a great thing (though avoid the guy who ‘can do anything for you’, unless you are feeling charitable!) for lasting friendships, especially if you plan on staying in CR for a longer time. San Jose is not for everyone and the beauty of Costa Rica’s rural coast, jungle and rolling mountain landscapes is reason enough to move on to quieter pastures and the pursuit of ‘Pura Vida!’: the Tico motto, greeting, or exclamation for practically everything, meaning pure life!

In the next post I do the ‘visa run’ after 3 months, then move to the Pacific coast, and the beach town of Playa Samara… stay tuned!