Sunday saw the last day of the Berwick Film & Media Arts Festival and a continuation of the road movie element with screenings of Wim Wenders Alice in the Cities, Magic If Media’s Northern Flame, A Live Road Movie in Super 8 and Sound by Screen Bandita and The One Ensemble and closing gala film The Great Northwest by Matt McCormick who travelled from Portland, Oregon to attend the UK Premiere.

The festival’s programme has happily featured a predominantly artist-led or independent filmmaking selection including several commissioned works such as that of the aforementioned Live Road Movie, Northern Flame and many other shorts and installations. This element of instigating artists practice makes Berwick an enthusiastic and involved festival – as well as clearly being a keen supporter of new and diverse work. 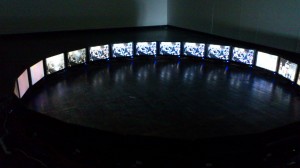 For my part I shamefully managed to see only one of the festivals fantastic site-specific installations – the highly recommended 24 Times by Jason Dee (pictured, left). Comprised of 24 monitors arranged in a circle, displaying footage of flashbulbs edited using clips from cinema such as Peeping Tom or Singin’ in the Rain, each monitor was timed with a one-frame delay, the edit occurring at the moment of flash photography. This produced a pulse of light set off in a loop, seeming to transfer from one monitor to another. The effect of this fascinating artwork is utterly beguiling. Echoing the illusion of movement of 19th century Zoetrope, or indeed a strip of celluloid, Dee’s installation presents a brilliant tension between analogue and digital cinematic technologies; each time the flashbulb goes off, this small firework like sound reminds us, in the semi-darkness of the space, of the bewitching nature of the moving image.

Brief Exposures showcased short film contributions from around the world. There to introduce her film was Frances Young, whose film Rise and Fall uses footage of disused cinemas in San Francisco to playfully question and explore the tension between analogue and digital film, producing beautiful and deeply textural layered images. Other highlights included a witty response to the apocalypse by acclaimed British filmmaker Andrew Kötting and Curious, and a mesmerising stop-motion animation Death of an Insect by Hannes Vartiainen and Pekka Veikkolainen.

Directly following the shorts was the fantastic result of collaboration between Edinburgh based collective Screen Bandita and Glasgow’s The One Ensemble. I’ve written about the wonderful endeavour of Screen Bandita elsewhere and in this case they were perfectly paired with the sonic delights of the four-piece chamber group whose instrumental talents (guitar, saxophone, oboe, cello, percussion and vocals) combined to produce an eerie and atmospheric soundtrack. The Bandita’s had dressed The Maltings Henry Travers Studio with hung postcards and photographs, and arranged a table of photographic paraphernalia and curiosities that the audience pored over during the interval.

The visuals came in the form of Super 8 film and slides, projected onto two screens and featuring various forms of transport, 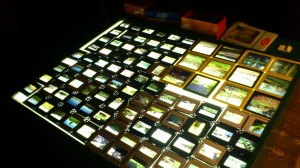 travel, holidaymakers, families, landscapes, towns, and homes. The rhythm of the visuals – moving from one place to another, seeming circular and playing with the notion of ending and starting again was wholly enhanced by the increasingly frenetic and moody sounds of The One Ensemble. There is something so evocative about the specific atmosphere created through analogue projection and live music – allowing the audience to make their own associations with the audio/visual and perhaps provoking recollections of their own travel or road trips.

Finally Berwick Film & Media Arts Festival had to come to an end, and it did with hugely enjoyable film The Great Northwest. Documenting director Matt McCormick’s retracing of a road trip undertaken by four women in 1958 across the Pacific Northwest, the film attests to the enormous industrial changes in the region that have impacted on the landscape and communities. McCormick’s impetus for the project came when he found an old scrapbook in a charity shop that charted the journey of Bev, Berta, Sissie and Clarice that took them through the tourist attractions and national parks of Washington, Idaho, Montana, and Oregon.

Employing an entirely linear editing process and only diegetic sound, McCormick’s film reflects on the passing of time, the absurdity of tourism and the quiet of a lone road trip. Perhaps what is most poignant is the element of an unconventional inheritance. None of the women married or had children, which explains perhaps how their document of such an epic adventure could have been given away. Instead McCormick is the unlikely channel of their legacy – hoping that in fifty years time another person will undertake the journey once more, thereby creating a new document of change.

By programming to a theme and utilising the historic buildings – not to mention the town’s people – Berwick Film & Media Arts Festival managed to succeed in being engaging and inquisitive in both a local, and international sense. Being resolutely non-commercial (Resident Evil 5 aside) has allowed for new ways to consider film and the connections between seemingly unconnected filmmakers, as well as creating an exciting way for the town to be explored via the installations, thereby further establishing the festival’s own cinematic identity.