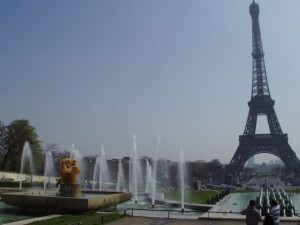 “The only thing wrong with Paris is …” the cliché we all know and shamelessly love is not entirely unfounded. Parisians are renowned – even in the rest of France – for their acrimony over their sense of style, etiquette and (dare I say?) baguettes. If you speak French you’ve got a better chance of getting on their good side but, even then, you have to remember to address them with a certain air of formality or else they’ll see through you’re cunning ruse to acquire their friendship and feign ignorance. The best thing to do is to take a phrase book, be as polite and patient as you possibly can and otherwise depend on yourself. This shouldn’t be too much to ask in a city largely re-drawn to make things easier for pedestrians to find their way around a big grid, so fret not! Paris can be as impressive on a testosterone level as it can be romantic and it certainly shouldn’t be ruined by rudeness.

The Palace of Versailles

It’s fairly odd to start a Getaway Guide to Paris by beginning with an attraction that isn’t actually in Paris! But that’s the perfect reason to see it. After a day or two in Paris you will welcome the quiet of the country as if it were a pint in the desert and it’s incredibly simple to get to. The RER train from any Metro station on that line (check when you’re at the station, they’re very easy to find if you’re not in one already) and head towards Versailles-Rive Gauche (€3.40) which is 5 minutes walk from the Palace.

Once you arrive, there are a number of different ticket options because to be simple is simply not French. I’d recommend just getting the Palace ticket (€15 each) because that’s where the magic is and the gardens are free anyway!! Win! Try to visit at 9am or after 3pm on Weekends and Tuesdays (Closed Mondays Apr-Oct) and it’s FREE the first Sunday of every month (Nov – Oct).

The palace itself is incredible! Enlarged to its (near) present magnificence by Louis XIV in the 17th Century, because he didn’t trust the Parisians (can’t blame him) and wanted to move his Royal Residence to Versailles, the palace stands as the most ostentatious shows of French Royalty in existence.  You can easily imagine Marie-Antoinette shuffling around the grounds blissfully unaware that her pretty neck was about to become a place for the plebeians to rest their guillotine. Inside the Palace is also the Hall of Mirrors. The fateful room where, in 1919, Germany surrendered and agreed to the harsh terms which would invariably lead to the rise of the Nazi party and the Second World War. Versailles is stunning, fascinating and, most importantly, different. It’ll be something that stays with you both forever.

Finding something along the lines of ‘new’ in Paris can be as difficult as finding a Liberal Democrat initiative in a coalition (easy joke, I know). Parisians like the ‘quirky’ and the ‘kitsch’ more than the ‘ultramodern’ but here we have two nightclubs which combine the two effectively. Both focussing mainly on electro/dance music – though they do often have live bands –the visitor benefits from the unlikely setting more than anything else. Le Batofar is actually a converted barge moored on the bank of the Seine in the 13th arrondissement. Showcase, on the other hand, is more like something from either Blade or Le Comte de Perrault. Donne your least ‘Trollish’ attire and come under the bridge Pont Alexandre III to dance the night away at one of Paris’ least conventional nightclubs. Either way, you and your partner are likely to have a night you’ll never forget.

If you’re feeling a little flush and you both enjoy a touch of the mysterious then the Auberges de Nicolas Flamel is definitely worth a gander. This small eatery is located in Nicolas Flamel’s actual house, within walking distance of Notre Dame. Flamel – an alchemist who lived here until c.1418 –who, it’s said, managed to produce the ‘Eilixir of Life’ to gain immortality and he also invented the Philosopher’s Stone which was said to turn dung into gold! It’s unlikely you’ll be as successful on your visit but you will be able to dine well in one of the most famous alchemist’s homes with no sign of dung anywhere.

If you’re looking to eat at a quirky restaurant that embodies the Parisian “Belle Époque” without selling your watch in order to do so, then look no further than Le Bouillon Chartier. Easily accessible from the Grands Boulevards Metro, it has sat on Rue Montmartre since 1896 promising the very best in rustic French cuisine at very humble prices. The Entrees outnumber the Main Courses but average around €4 each whereas a Main Course will range from €8.50 to €12.40. All in all an excellent Art Deco cove to impress your other half without bursting your budget bubble.

The ‘Sky’ of Paris bar is aptly named. Its view of the city is unparalleled and it has a wide array of drinks from the classic to the complicated depending on your palate and wallet. Easy to book a reservation via the internet – it’s definitely recommended to do so – but get there early if possible, even if you’re only staying for drinks.

The Cafe de Flore, though with a vista of considerably less extravagance, has an unmatched vintage of clientele.  Jean-Paul Sartre, Simone de Beauvoir and the veritable Odin of masculine writers, Ernest Hemmingway, have all frequented this quaint bar in the Saint Germain district over the years. You can sit there, savouring a bottle of red, while imagining Hemmingway jotting down notes of courage and tenacity, perhaps, at that very same table.

Heather Stimmler-Hall, Paris guru, recommends this simple little activity for all those in need of a break from spending while in Paris. It translates as “Hot Wine on the Seine” (looks nicer in French, doesn’t it?) and is basically as simple as that. France is the home of cheese, bread and wine and that’s all you need to take part in this early evening gem. If you’re planning a winter sojourn to the City of Lights then prepare some hot wine in a thermos, take a blanket and enjoy the best of what France has to offer at the quays of the Île St-Louis where you can watch the sun set, sheltered from any nasty winds conspiring to make your night anything less than perfect. A touch of romance never hurt anybody … especially when it’s as cheap and simple to put together as this!

All in all, Paris is bound to be a safe choice for any bloke looking to impress. It’s dripping with culture, history and the walls are positively oozing with romance. If she’s been there before then just scroll back up to the top and at least one of these little tasters is bound to be off her radar and land you lovingly on hers once more. Don’t forget, just because you’re thinking about The Old Man and the Sea while she’s sat opposite you thinking about Sartre’s existentialism, it doesn’t mean you’re not enjoying your time together. You’re just enjoying it for your own guilt free reasons! Just don’t go thinking about Carla Bruni, she’ll know! They always know …