Bosnia was our third stop on a trip round the Balkans, and like most travellers we spoke to, we were unprepared for how much it differed from the surrounding countries. Crossing the border from Croatia the landscape became spare and amber and the temperature rose sharply.It was 43 degrees by the time we entered Mostar, thick, misty heat a world away from the sunshine of Dubrovnik. Mostar is the political, cultural and economic centre of the southern region of Herzegovina, and the site of some of the most heartbreaking damage of the Balkan war. Ethnic hostilities stirred by Serb nationalists carved the city in two, and during the nine month long siege, the Muslim population was violently forced into the Eastern side. As an elegant elderly lady explained to us, if you could see any part of the Western side, that side could also see you and you were vulnerable to the merciless sniper attacks. Stari Most, the iconic Ottoman bridge that straddles the banks of the Neretva River, was destroyed in 1993 in an act which symbolised the shattering of the unions that had long existed between Mostar’s diverse communities. 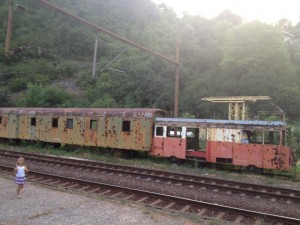 Mostar wears the memory of these years without pretence. Most of the buildings around the centre are still starred with bullet holes, and there is a palpable sadness in the air. The hillsides are bare, and pristinely maintained Muslim cemeteries with polished white stones linger over the streets. 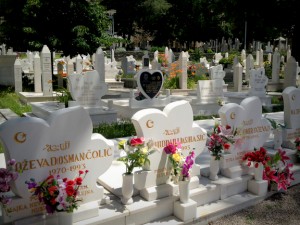 Women embrace the stones weeping. They are pushy mothers who never got to see their dreams through, and whose dreams remain their only reality twenty years on. It is absolutely chilling to take a walk through one of these cemeteries, and to see how, while the birth dates of the men in the photos vary by five, ten, forty years, the second date is always the same: 1993 took everyone.

For all its sadness, Mostar is a beautiful town. The famous bridge swoops into the sky over a smooth blue river, and the slippery cobbles and tiny houses scattered over the nearest hills are those of medieval romances. 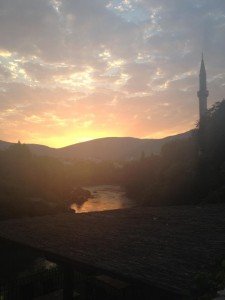 There is a mosque set into the staggering cliff, and street sellers peddle jewels and hookahs, traditional slippers and big earthen pots. The most popular club with tourists is called ‘Ali Baba’, and this is characteristic of the image which Mostar paints of itself, an oriental treasure to surprise those who stray inland from Croatia’s beaches. I cannot help thinking, however, that it paints this picture wearily, that Mostar is tired and sad and not yet ready to be invaded, for a second time, by tourists. Even in the wide, tree- lined streets of the suburbs everything seems strangely deserted, hushed by the heat and the terrible presence of the bridge. The green-lit bars sit strangely on the river banks, and the bar crawls organised by our hostel are incongruous to the point of absurdity. I do not mean to portray Mostar as negative or depressing; it is an exquisite, haunting place, but it is best enjoyed gently, with eyes open to the ghosts that nest in its old stones.

Mostar’s geography means that the hottest time of the day is around 5, when the cliffs which surround it have trapped the day’s sunlight, making the town radiate with blood boiling heat. Consequently it is best to get out early to sightsee. Karadjoz-Bey’s Mosque is really worth visiting for the decoration of its interior, brighter and somehow sweeter than the designs of London mosques. The Muslibegovic House is the preserved home of a rich 18th century Muslim family, of such refined opulence that I felt pangs of genuine, childish jealousy as we explored it. The local beers- Sarajevsko and Hercegovacko- are excellent, and we drank ours under the bridge at twilight as the heart shaped space filled up with people. There was a low hum of voices in the dark around us, whispery laughter and clinking glass, and this seemed, finally, like the right volume and tempo for this place. Mostar is is still frail and slow from the blows of the past, a gentle, blurry town that does not suit the authority it holds in the region. I would love to return to it in the snow or the rain to see if its mood changes after the stagnant summer, if it was perhaps a slight fever that filled my mind with these impressions. 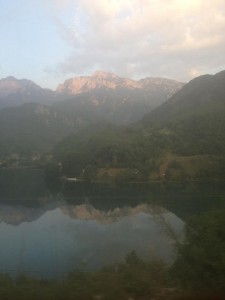 The word Sarajevo does not, to my ear, sound Bosnian. Looping and silvery, it sounds like a separate place with a separate language, and I found this to be true to some extent. The train journey from Mostar to Sarajevo takes about eight hours, and encompasses scenery of such startling beauty that every carriage was silent. I had no idea how dramatic and vast the landscapes in this part of the world are, but they surpassed anything I have seen, and I urge anyone who is in the region to take this journey.
Sarajevo, when we arrived, looked like a scruffier, softer Istanbul, and was one of the best places I have ever visited for just being. The coffee is bitter and velvety, the food is somewhere between Middle Eastern spice and Slavic heaviness, and I could have happily spent weeks, and thousands of pounds, wandering and watching and consuming. As in Mostar, the tourist attractions centre round the old town. As well as the jewellers and kebab restaurants which line the streets, this quarter is full of antique shops of real quality. At night, tight alleyways reveal vibrant, glittering bars with outdoor seating and very cheap drinks. A little outside the old town we found an incredible place called Zlatna Ribica, where guests are greeted with bowls of apricots and terracotta pots of crispy sardines on arrival. It was crammed floor to ceiling with old books and jewellery, the kind of place that would make a fortune in London, and where you could play with things for hours. People in Sarajevo astonished us with their friendliness. A man whose hotel we had turned down at the station recognised us a few days later and cheerfully invited us to sit with his friends to have a morning lemonade. Walking back from a bar one night, we met the son of the lady we were staying with, who reopened his pub so we could have a nightcap and then drove us home.

Sarajevo does not show its past in the way that Mostar does. When you are in the bustle of the city it could be Barcelona or Prague, and it has none of the scenic tragedy of the countryside we travelled through on the way to it. But when you climb the hills, Sarajevo becomes a different place. The road running upwards is studded with cemeteries cut of the same cool, clean stone as those in Mostar, only on a much larger scale. Approximately 10,000 Sarajevans were killed or reported missing during the 315 day siege of the early nineties, and the hills do not allow you to forget. At twilight we sat on the roof of our house and watched a thunderstorm turn the city violet. The noise made my jaw ache, and yet it did not rain. The graves lit up very white. But I did not feel the bitterness that I thought I had heard in Bosnia’s name. Later in the week we got to attend Sarajevo’s annual film festival, where we saw Aida Begi?’s wonderful Children of Sarajevo. The film follows two siblings orphaned by the war, and was advertised all around the city. Where Mostar has bullet holes, Sarajevo has posters. The culture which this city has developed out of its own tragedy, the way in which it has scanned the dark for light, is indicative of a healthy way of healing. Like an individual, a group of people must cease to repress the past if they are ever to make peace with it. In Mostar, the stones of the building were still too ashamed by what had happened to contemplate planning for the future. I do not mean that there was no hope or progress there, but some places retain the feelings of the people in them long after we think those feelings have vanished, and this was uncommonly apparent in Mostar. Sarajevo embraced itself; Mostar is still stunned. 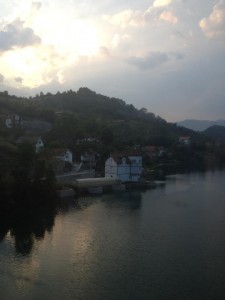 We met a man after the festival who was visiting his brothers in the city. He was about fifty, with a drooping moustache and sad eyes, and he told us that he had lived in Hull for nineteen years, that his sons were not Bosnians, that he missed his life here every day. He spoke with sorrow, and I wondered if he was glad he had left and if he felt he had saved his sons for anything worthwhile. Of course, his was not a story unique to Bosnia. London is full of people like him who paid for survival with literally everything else they had. But in Bosnia the sadness was clearer to me because it was accessible; the besieged children started school at the same time I did, their parents queued for water in Levis and trainers. Every person my age had a shattering start to their lives. This is why Bosnia is fascinating; it is a modern, secular and essentially European place which struggles to combine twenty-first century normality with the looming memory of archaic barbarism. Different places play this struggle in different ways. Sarajevo has advanced a thousand years in twenty, glossily archiving the past to show that it is past. But my instinct tells me that Mostar still cannot do this and will retain its melancholy for some time yet.