‘I can’t adjourn a meeting that hasn’t started,’ Richard Ottaway MP announced in the Grimmond Room of Portcullis House. The Foreign Affairs Committee had been about to get down to business when the division bell rang. This gave the MPs present eight minutes to leg it to the lobby in the House of Commons. 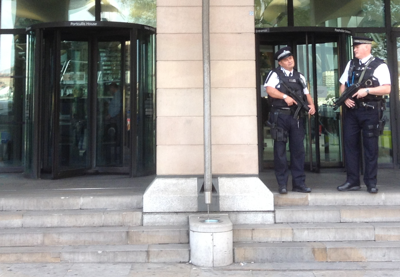 The friendly welcome at Portcullis House

The vote that left Dr Robin Niblett of Chatham House waiting to give his views on Government Foreign Policy towards the United States was the Anti-Social behaviour, Crime and Policing Bill, report, new clause 26. Twelve minutes later Mark Hendrick MP returned and took his place at the U-shaped desk. We waited for the other MPs to return so that the session could get started.

Then the division bell rang again.

Mark Hendrick stood up and left the room again. This time his presence was needed to vote on the Anti-Social behaviour, Crime and Policing Bill, page 55 Amendment 96. Some sort of electronic voting system would surely stop wasting everybody’s time.

The subject of the Special Relationship between the US and the UK is something that I have always thought exercised the Brits much more than the Americans. Now I have academic proof that that is the case.

Solid but not slavish is how Niblett described the current relationship, quoting David Cameron. The relationship with the US is the UK’s most important bilateral relationship, but he explained how it is American rather than British officials who will insist on the word ‘Special,’ knowing that they do not actually believe it is more special than their relationships with other countries. It appears to be flattery, though why being seen to be close to the US is a good thing is not always clear. It costs the US nothing to say it and keeps Britain onside, providing the fig leaf of coalition that allows the US to pick fights around the world.

Militarily the relationship has become hardly special at all as the scope of the British military has decreased, although Niblett believes that British Special Forces are still highly regarded by the US . But it is diplomatically that the UK-US relationship could be called special. The Snowdon leaks show that there are still close intelligence links between the two nations. Niblett said ‘From the US perspective, we are a very special ally.’ But he went on to explain, ‘The fact that I put ‘very’ in front of it means that we may not be the only one’.

The second witness was Dr James Boys, Associate Professor of International Political Studies, Richmond University. He also believed that it is in intelligence that the relationship is most beneficial. He pointed out that though the USA is an Atlantic power, it is a Pacific power as well and we should not worry unduly about any pivot towards Asia . To strengthen the relationship he would enhance the Joint Strategy Board.

Finally Professor Malcolm Chalmers from the Royal United Services Institute was called to give his opinion. In his view the UK’s influence with the US is indicated by the No vote on Syrian military action in the House of Commons. Without that he believed the action would have gone ahead. The No vote ‘clearly had an impact on the calculations of the president.’ Chalmers also pointed put that British defences are and have been closely integrated with the US for a very long time.

In the end, as Professor Chalmers commented, ‘The US is the the world’s superpower and it is very much in our interest to have a close relationship with it.’  As is often said, the two nations are connected by history, shared values and common interests, however I doubt there is a similar committee meeting in Washington worrying about the US relationship with the UK.