Beserk is a popular Japanese Manga comic book and also an animation series. A new trilogy of feature length anime movies has been created by Studio 4oC that concentrate on a story ark entitled The Golden Age. The first two movies of this trilogy were screened at the Scotland Love Anime film festival at the Edinburgh Filmhouse. Producer Fuko Noda and Character Designer Naoyuki Onda were in attendance to give a Q and A after the screening.

The setting for Beserk is a medieval fantasy world where a war rages and bloody violence is all around. The protagonist is Guts who is a powerful and brave fighter. His superior swordsmanship and surprising strength are his main traits and give him the upper hand on the battlefield. The beginning of the film sets the tone as a strategic battle for a vital fort brings us full pelt into the fantasy world and the conflicts therein. Baso is a soldier who takes out his opponents with ease. That is until he meets Guts who dispatches the warrior with vigour and finesse. Guts however meets his match by battling with Griffith, a somewhat feminine warrior. Griffith then persuades Guts to join his group of mercenaries called The Band of Hawks and this sets the scene for the anime.

The story jumps forward several years where we find out that Guts has progressed within The Band of Hawks to be a respected and valuable fighter. Apart from the first few battle scenes Berserk takes it time to get going. The plot does not unravel itself until the end, when a shocking and unpredictable twist occurs. This truly sets up the story and the second part of the trilogy. The whole concept of the ‘Egg of The King’ however is not explored enough, especially since it lends itself to the films title. What we generally see is the conflict between Griffith and Guts, but this in itself is enough to carry to anime.

Overall Berserk is a visually stunning film with great battle scenes. The Q and A after the screening focussed on the ‘Hybrid’ animation style, where the armour of the characters were created in CG and the faces where hand drawn. This technique worked well, with the shiny and mechanical like surfaces bringing out the style. Also the articulation of the hand drawn animation worked well with the faces and did not distract from the visuals.

Berserk – The Golden Age Arc – Film 1: Egg of the King won the Critics Choice award at Scotland Loves Anime. It is a worthy winner and definitely a title worth checking out, especially if you can see it on the big screen. 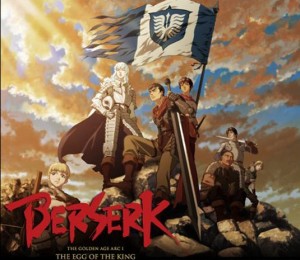