You’ve rounded up a raggle-taggle bunch of like-minded, dedicated performers. You’ve earned your acting credentials in Edinburgh’s Fringe, gathered your resources and invested time. What next to do, if you don’t want to beg, cap in hand, for Arts Council funding?

Boldly go to the market which endures fickle fashions and weathers recession storms.

There will always be science fiction fans. Their love for their chosen genre is almost infamous in its ferocity, loyalty, evangelism.

Esc F8, Scotland’s only science fiction theatre company, relies on this inexhaustible audience. The company presents itself as a tool for commissions from writers, venues, a 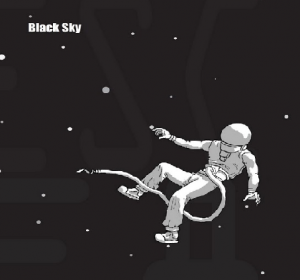 Their first mission came from the Scottish Storytelling Centre in Edinburgh, resulting in Black Sky on the 4th of November.

The audience is welcomed by a guide droid on board the Voyager 384. Identifying our departure location he “patches in” his best Edinburgh accent. Passengers are instructed in tones now very close to Gary the Tank Commander, we will take off in five minutes but shall not hear or feel the engines.

Over the tannoy, our captain announces flight details – in both English and Martian, of course – and introduces in-flight entertainment droids who will tell ancient stories of earth’s demise.

Cat Somerville’s story is set in the 01950s, when rockets were first invented. A junkyard worker, spends his savings on a second hand junked rocket. Working maniacally on it day and night, he announces to his family they will go to space. His wife refuses; it is a suicide mission. His children follow him in delight.

Tom Freeman then brings us tales of the 21st century, “when unrest and discord crept in first”.  Godzilla is a functioning member of society, following his 12 step Monsters Anonymous plan. He aches to rampage and destroy. Government officials turn up at his door, offering to provide an outlet for his rage. They dangle a list of “constructive” targets. Gay clubs, Asylum Centres, slums.

Our last chronicler Cam Wong tells a more recent story from the home planet Earth. He describes a family’s life in the bowels of a metal man. In search of resources, mother drives the machine and father repairs the machinery.

The evening is a self-professed celebration of silliness. You get the sense that it’s not supposed to be taken too seriously when the guide brings the in-flight meals and visits every audience member individually, asking “haggis or lasagne?”. The ‘meals’ look and taste very much like tic-tacs.

Yet science fiction has a way of infusing fun with serious insight. The 50s story, spread with sentiment though it is, tells of a world in which the realisation of dreams is strictly reserved for the privileged classes. The under-privileged are even further ignored in Godzilla’s 21st century which provides a less subtle yet important diagnosis of simmering social discontent and immoral government control. We are terrified by projections of the future, when profound environmental damage has forced us inside forever.

The themes are somewhat weak. There’s untapped potential to play up social and environmentalist issues. However, concentration on the dark side might deflate the buoyancy of the night.

Black Sky has a low budget air that is integral to sci-fi. The special effects fund has stretched to a tinfoil gun for the freedom fighter alien and creepy contact. This is the shows charm. It is endearingly shabby. Imagination, acting and material are the cornerstones of the night. Great performances are given by Freeman and Somerville, culminating in a brilliant rocket take off and a particularly well-observed Godzilla impression.

The artistic decision to punctuate the stories with ‘glimpses’ of space projected on the back screen. We hear Yuri Gagarin gushing about the dawn he is witnessing. “I’m feeling good!”. As passengers forced into space by the collapse of Earth, we are left dubious in the face of his joy.

1 Comment on Black Sky: Futuristic Kids on the Block