From the illustrious animation house – Studio Ghibli, From up on Poppy Hill is the second film from the director Goro Miyazaki. The son of Hayao Miyazaki (Spirited Away, Ponyo, Howl’s Moving Castle) Goro’s previous film, an adaptation of Ursula K. Le Guin’s Tales of Earthsea, was very much seen as a disappointment. Therefore expectations for this film were high, as Miyazaki junior has a lot to live up to.

The main theme of From up on Poppy Hill is nostalgia. Set in 1960’s Japan we are told the story of Umi Matsuzaki and Shun Kazama who group together to try and save a clubhouse at their college. The clubhouse is due to be demolished and their valiant efforts take them to Tokyo, which is in preparation for the 1964 Olympics. This is a far cry from their sleepy costal village and shows a Japan that is trying to rejuvenate and reinvent itself.

The themes and style of the anime could be lost on western audiences. A Japanese soundtrack that is in keeping with the 1960’s theme brings the audience back in time, even though they may not be familiar with the music. What keeps the story together though is the relationship between the two main characters and how they work with one another to achieve what they desire. This theme is universal and audiences, regardless of their background, will warm to this premise.

Although unlikely to receive the same praise as other Studil Ghibli classics, such as Grave of Fireflies and Princess Mononoke, From up on Poppy Hill was definitely an enjoyable film from start to finish and will definitely restore some pride to director Goro Miyazaki. 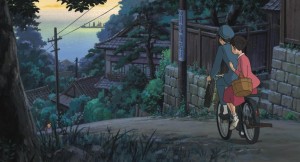