Wolf Children Ame and Yuki was a standout film at the Scotland Loves Anime Japanese Animation Film Festival. The movie is directed by the celebrated animation director Mamoru Hosoda (The Girl Who Leapt Through Time, Summer Wars) and produced at the newly created animation house – Studio Chizu.

Werewolves are very much present in popular culture at the moment but Wolf Children Ame and Yuki has its own unique take on the mythology. The story is narrated by Yuki who looks back at the life of her Mother Hana and how she met her Father. Yuki’s father was a werewolf who falls in love with Hana and the couple have two children together. Unable to adapt to city life Yuki’s father cannot contain his werewolf urges and eventually dies, leaving Hana to look after the children on her own.

The story follows Hana as she moves her family to the country to raise her children. Life is a struggle as she tries to maintain a farm and look after two young children who can turn into wolves at a whim. Ame finds it hard to live as a boy, while Yuki wants to conceal her werewolf roots and this is the conflict that the story centres on.

Wolf Children Ame and Yuki is a tale of belonging and trying to fit in as a kid. It is also about the struggle of single parent hood and the right to chose ones own path in life. Hosoda is a director who knows how to tell a great fairy-tale. The audience will feel captivated by the characters and their journey.

Wolf Children Ame and Yuki was definitely the highlight of the Scotland Loves Anime Festival. Having been shown at the London Film Festival the week before, Wolf Children was illegible for the critics choice award. This is unfortunate as this is definitely a movie that deserves international awards and a large audience. 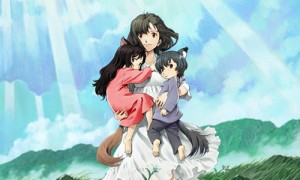