Nerawareta Gakuen (Psychic High) had its world premiere at the Scotland
Loves Anime Festival several weeks before a theatrical release in it’s native Japan. The animation itself only finished completion several days before the screening and was a major coup for the festival.

Visually Nerawareta Gakuen is a pleasure to observe. Taking a modern Japanese animation style with a bright and bold palette, we are presented with an inviting and intriguing world. From the first frame we know we are in a fantasy setting, with the backgrounds being the highlight as opposed to the generic character designs.

The story centres on Ryoichi Kyogoku a young male exchange student who has Psychic abilities. The main focus however is another student called Kenji. He is a awkward comedic character who is responsible for most of the funny elements of the film. His romantic relationship with his next door neighbour Natsuki is merely a sub plot, but actually dwarves the thin main story which does little to carry the film. The main plot involves Ryoichi Kyogoku and his intention to ban mobile phones from the school. This element of
Nerawareta Gakuen is never explained but is mulled over at length. Not explaining the need for the mobile phone ban is incredibly frustrating and also not exactly a cohesive plot point to carry the animation for a whole 80 minutes. What could of been an interesting high school comedy ends up being a total mess that is difficult to follow and enjoy.
This coupled with a somewhat overbearing and melancholic soundtrack develops an aura of displacement and an unsatisfactory experience. 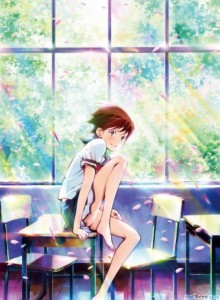