Who hasn’t wiped a tear from their eye when remembering that the Bloomsbury Group is no more, the Fitzroy Street Group no longer meets or the Camden Town Group no longer exhibits? But put that ‘kerchief down – the Camden Town Group developed into The London Group, which is still going strong and exhibiting annually. 2013 is the Group’s centenary and a history of the first hundred years  has just been published (** See below for how to win a copy). Their next show will open on 16th November at The Cello Factory, but from 1st November 2013 to 2nd March 2014 the first 50 years of The London Group are being celebrated at the Ben Uri Gallery. 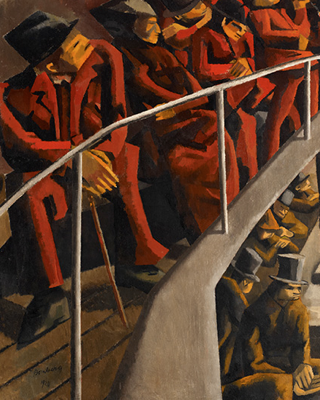 Entitled Uproar! to reflect the press reaction to their early controversial exhibitions, curators Rachel Dickson and Sarah MacDougall have created a show that includes fifty works from fifty different artists who were members of the Group between 1913 to 1963. Composed mainly of pieces that were exhibited in London Group shows in the past, many works have been loaned from prestigious public and private collections across the UK whilst some come from the Ben Uri permanent collection.

Covering two floors, the show starts with Harold Gilman’s Fauve-influenced portrait of Sylvia Gosse. It includes well known names like Bomberg and Hepworth before ending with Kossof’s expressive charcoal portrait of N M Seedo. Mark Gertler’s 1914 piece The Creation of Eve is included, which was the image that caused most uproar in the media. Accused of ‘impertinence with a seasoning of blasphemy,’ some detractors linked it with the First World War and described it as ‘hunnishly indecent.’ Sickert, Fry, Gaudier-Brzeska and Nash were all members and their work can be seen in this show.

Hung chronologically the exhibition is an education in the development of British Art history. Visual highlights from the period in all media are on show, including the thick impasto of John Bratby’s 1955 Kitchen Interior, along with works in oils, lithograph, watercolour and linocut, marble and bronze. Bratby’s work kept up the uproar in the press with its expressive depiction of everyday mundanity whilst Paule Vezelay’s Bathers from 1923 is more rhythmic and graceful.  Euan Euglow’s Big Bertha, is created from an underlying structure, as though the human body is built like a shopping centre and merely the result of a series of mathematical calculations.

The London Group had more than its fair share of ground-breaking early modernists who the media disliked – writing about the 1919 exhibition critic JBM comments in the Daily Herald, ‘It would be more difficult to say what is the worst.’ Nevertheless many of the artists that caused such an uproar are now regarded as upstanding representatives of 20th century British Art.This show allows you to see the best of the early work that defined an era and has had an influence that critics at the time couldn’t have imagined.

Entry to the Ben Uri gallery is free.

**The Flaneur has a signed copy of David Redfern’s book, ‘The London Group: a history 1913-2013’ to give away. It is the definitive publication about the London Group and required reading for anyone who wants to be able to say I know everything there is to know about The London Group. Not just a history of the Group, it puts each year’s exhibition in context with world events and artistic developments around the globe. You can buy a copy here, but The Flaneur has a signed copy to give away. To be in with a chance of winning just email win@flaneur.me.uk with LONDON GROUP in the title, or follow @Flaneurzine on Twitter and tweet us with LONDON GROUP in the tweet. We’ll chose a winner on 7th November.