This month’s SLAM art tour around South London coincided with The Big Draw so everyone was given some paper and a pencil by The Dining Room Drawing Club to record their evening. I entered into the artistic spirit wholeheartedly, keeping my notes on the same sheet of paper as my masterpiece. Unfortunately that has rendered my record of the evening slightly incomprehensible… 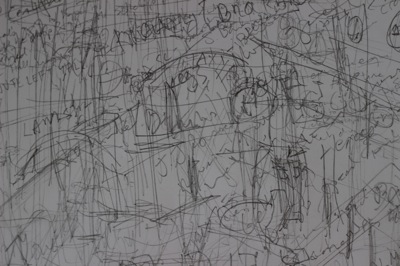 A bi-colore examination of the dualities present in ‘drawing’, embracing the essential materiality of the medium whilst challenging artistic stereotypes. Like the development of language itself, within the chaos there is an essentially formal choreography – a response to Rinascimento mark-making, Flemish aquatints and getting lost in Elephant and Castle.

The SLAM art tours take place on the last Friday of the month, and this month Tina Emenyeonu led a group of around thirty people around the Bankside area of South London, calling at galleries where artists and curators spoke about the work, performances occurred and Howard Dyke suddenly destroyed a huge painting and left it in pieces on the floor. You can see images from the tour here. I did have copious notes from which to reconstruct the tour moment by moment, so that you, dear reader, would feel you were there. Unfortunately as mentioned above I can only make out the odd word. And they are very odd words, the clearest of which are – Tax, J.J. Rousseau, Borough Road, cranes, Hannah, What’s going to happen, lost my passport, and Society of Experimental Engineers. 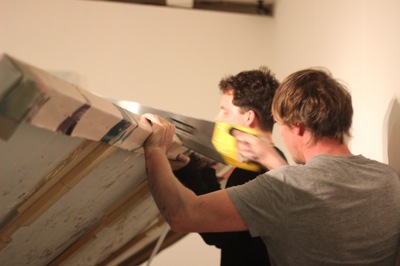 Anyone who has experienced walking around a part of London they don’t know, map in hand, looking for galleries will appreciate the idea of an art tour. You turn up at the start and get led around the local art world. It is amazing how a human will follow someone whom they only met a few minutes before. I only balked once – when directed down a dark alley, one side topped with razor wire, on a disused housing estate in Elephant and Castle. I wasn’t even following a group anymore as everyone else seemed to have gone a different route. I was brought up not to walk down dark alleys. But then I was also brought up to do as I was asked. It was a conundrum.

‘You’re asking me to go down that dark alley?’ I queried.

Assured it was the right way I went, and found myself at the temporary exhibition space of Hotel Elephant, showing a site-specific geometric sculpture by Nathan Murphy. Deep sighs of relief all round. Hotel Elephant is a marvellously named gallery and studio space on Brandon Street, South-East London. Located in an old doctors surgery on the Heygate Estate it is a creative space with an exciting atmosphere. And it has a bar.

We had started at the Jerwood Space, where three artists showing in the drawing prize had created works just for our visit. That makes you feel special and we stayed for a while after being given an informative introduction to the exhibition. Then we left for the Ceri Hand gallery, located in what looks like an old school hall on Copperfield Street. Showing work by Hannah Knox, BUFF was a show of pictures that used fabric as a ground – including Nineties-style heat-sensitive T-shirts. These reduce painting to its primary components of colour, cloth and support.

Then we headed to the ASC Gallery, where I DID, DID I was showing – a group show of paired paintings. Two identical spaces showed pairs of artworks- one piece by each of the five artists in each space. These become an off-beat echo of each other, or at least they did until Dyke attacked one painting with a saw.

That’s one of the advantages of visiting galleries as part of a tour – the artists are often around to talk about their work, or do performances when the group arrives. It makes for a more informative trip around the galleries.

Finally, after a route that could have been less circuitous we made it to Danielle Arnaud, a space that has existed since 1995 and allows artists to develop without the constraints of the market. Inside the townhouse gallery David Cotterrell explained his electronic works to us, one of which was The Ostrich Algorithm, which really ought to be the name of a best-seller. Inspired by Ray Bradbury’s The Martian Chronicles he has hacked call centre software so that several computers are in a loop of infinite response, calling numbers which only dial other computers running call centre software. The room has a weird aural background as the different computers phone each other and attempt to talk.

Each month SLAM tours a different part of the South London art scene. Tours are free, but a donation is asked for. It wouldn’t be polite to say you’d be mad to miss it, however you definitely wouldn’t be mad to turn up and discover some new shows and exciting galleries.