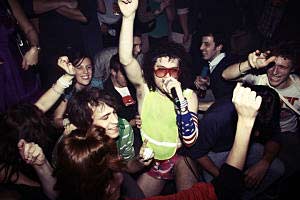 The general council of hipsters called a press conference in Shoreditch today. They have released a statement calling for uncool people to offer themselves to be burnt as fuel to solve East London’s energy crisis.

There is a chronic electricity shortage in the area between Bethnal Green, Dalston and Hackney known locally as ‘art-school triangle’. This was caused by the migration of the original cockney residents to Essex which was, in the 1970s, an independent magical kingdom populated with Hobbits, Goblins and Dragons. The cockneys used their craftiness to take over the county and promptly re-routed the energy supply from East London. As a result, power cuts have been occurring regularly since the 1980s but as the only residents left in the East End couldn’t speak English, no-one really worried too much.

The art school graduates, who have taken over the area, plan to install especially bright floodlights around the area so they can wear sunglasses 24 hours a day. They claim the move is a much needed safety measure as recent power cut brought chaos to Commercial Road when 100 hipsters stumbled blindly all over the busy street because they had forgotten how to remove their shades.

As part of a plan of sustained action, the hipsters have all asked their parents for money and collectively purchased an old Victorian power station located below Hoxton Square. It was built by the Victorian landowner, Nehemiah Slavencock who originally designed it to be fueled by burning poor people. The hipster council have now suggested that they use uncool people as fuel to drive the power station and have released an appeal for squares to come forward and help end the East End’s energy crisis. Any excess power produced, the hipsters say, will be sold to provide funds for mephadrone, ironic tattoos and more warehouse parties. The call has been extended to include anyone displaying a non-ironic emotion, anyone with a science degree and anyone who doesn’t like Mogwai.