Films about death that seek profundity run the obvious risk that bleakness will sink things below an audience’s limit for an emotional dive. Those concerning assisted suicide, perhaps doubly so. In Your Arms, a Danish drama on the subject by writer/director Samanou Acheche Sahlstrøm, manages a fairly deft dance through the gloom by means of finely observed naturalism, prickly humour and a touch of melodrama. 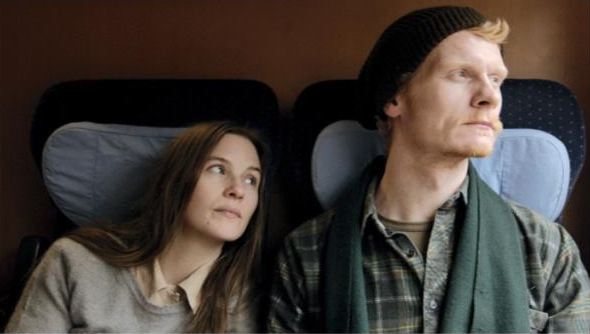 Swedish hospice nurse Maria (Lisa Carlehed) seems to barely exist in her small, cold Copenhagen apartment, alone but for an unwanted cat that she doesn’t even have the desire to name. Her masochistic tendencies, such as a penchant for casual self-torture with scalding water, prepare her for the flagellation of dealing with the unrepentantly vicious Neils (Peter Plaugborg). Wheelchair-bound from end-stage motor neuron disease, Neils’ pleasure in the emotional pain of others has alienated everyone around him, including his family. After Neils botches a suicide attempt while under her care, Maria, through a mixture of guilt and compassion, agrees to take him to a Dignitas-like clinic in Switzerland via a stop in Hamburg where she is given insight into his past.

As to be expected, what follows is dark and occasionally tough viewing, but not as bleak as might first be concluded from the subject matter and lingering views of frosty winter landscapes. Candid scenes of the daily indignities of paralysed life are leavened by black comedic interludes, Neils’ amusingly caustic jibes, and a touching hopefulness. Thematically, much is made of boundaries in the film both literal and figurative. This provides some of the film’s most perceptive moments, but also some of its most hokey; the symbolism employed meandering from the elegant to the cumbersome. Significance of windows as cruel transparent barriers is made sufficiently subtle, a roadside deer requiring a mercy killing considerably less so. Theme and characterisation mesh well, as the awkward balancing act between unwelcome support and ungainly professional detachment is played out. The tension elicited when these lines are laid out and then crossed is where the film finds its richest source of humour and pathos. The central performances are excellent, animating the somewhat stale cliché of the virtuous nurse/hard patient relationship. Of particular note is the accomplished physicality both display, as Carlehed visibly unfurls throughout and Plaugborg imbues Neils with a complex blend of threatening presence and vulnerability.

Graceful handheld cinematography by Brian Curt Petersen, frequently held in elongated close-up, is simple but precise, sharpening the raw emotional scenes and taking the edges off the stagy missteps. More openly expressive is the editing from Theis Schmidt, working with confident fragmentary cutting and providing constant reminders of the unfinished. The soundtrack chops songs suddenly short, and jumps in time and space throw us out of moments we’ve relaxed into. These devices are neat and, despite their blunt and conspicuous nature, feel earned and appropriate as vicarious engagement with Niels’ condition and decision. While the formulaic foundations beneath the film are plain to see, as Neil’s barbed tongue softens to Maria’s befuddled charms just in time for the obligatory kiss, such cosy familiarity is welcome when harsh reality threatens to become oppressive. Those expecting something more provocative and ambitious might balk at the sentimental and conventional aspects, but perhaps better to float when the alternative is to drown.