Please spread the word about this petition by tweeting: Tweet

In October this year 26 year old Wlodzimierz Umaniec (also known as Vladimir Umanets) was arrested on suspicion of defacing a Mark Rothko painting in the Tate.  He had scribbled ‘Vladimir Umanets a potential piece of Yellowism‘ in black pen on the very valuable painting Black On Maroon. In an art-world where any behaviour is usually seen to be acceptable, Umanets had discovered one last taboo.He has said that his actions were a work of art in themselves but the authorities did not see his behaviour as a dadaesque statement and he was prosecuted. 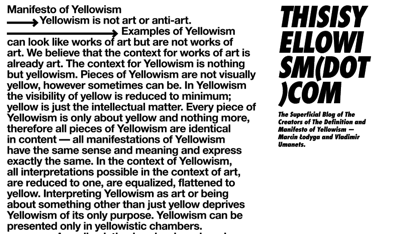 The case brought Yellowism to the attention of the art public, who were generally dismissive of its aims and complex manifesto, some of which is reproduced above from the Yellowism website. Is Umanets a serious artist or a vandal? The court was told that the restoration of the painting could take 20 months and will cost £200,000 – a huge amount, until you hear that the painting itself is valued at between £5 and £9 million. Judge Chapple commented that Umanets’ actions were ‘utterly unacceptable’, a verdict with which most people can agree.

However, having been found guilty of the crime Umanets has been sentenced to 2 years in jail.

It is not to condone his actions to ask if this is a reasonable punishment.

One artist doesn’t believe so. Mary Fletcher has written to the Home Secretary to ask for his sentence to be reduced. She says, ‘People should only be imprisoned for violent crime. I am an artist and I appreciate Rothko but to take 2 years of a man’s life is utterly ridiculous.’

Mary has set up an online petition asking for Umanet’s jail sentence of 2 years to be altered to a non custodial one. You can sign it at:

What do you think about this Umanets’ crime and punishment? Please comment below.

2 Comments on Should Umanets really be jailed for 2 years for defacing a Rothko? #yellowism