Rimini’s most famous son is Federico Fellini, born in the Adriatic seaside resort in 1920. His filmography is a mix of realism and imagination (for every La Strada there’s a Satyricon) and – to push an analogy to its limit and a few steps beyond – the town itself echoes something of the diversity of Il Mago’s films. It’s got a Corso d’Augusto and a Via John Lennon. It mixes an ancient centro storico complete with Augustine arch with an hedonistic modern beach resort. At least it looks as though it is hedonistic; I visited in winter when the seafront was abandoned, yet the sense of having a jolly good time lingered in the piled up surf boards and battened-down beach bars. 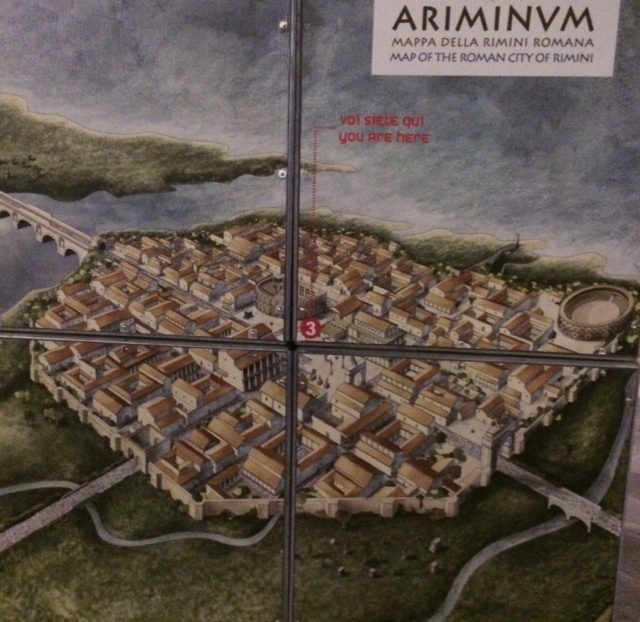 Fellini gives Rimini its 20th century glamour but its greatest historical moment has to be 49BC when it was still called Ariminum. There’s a monument in Piazza Tre Martiri marking the very spot (possibly, possibly not) where Julius Caesar gave his famous Alea iacta est speech. The die has been cast! Caesar exclaimed, having crossed the nearby River Rubicon. Not that that was in itself a big deal – the Roman Republic had no Thou Shalt Not Cross Rivers commandment. It was doing it at the head of an army that Caesar knew would lead to disgruntlement and a spot of civil war.

So Rimini has history and glamour, but it is most known for its sunny beaches. If you pitch up in the middle of winter what’s to be seen? Worry not, there’s still plenty to investigate. 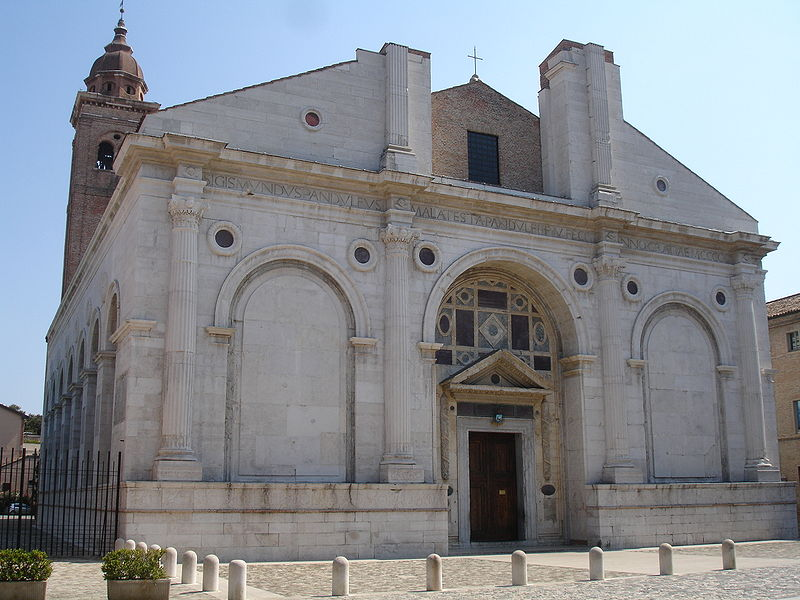 This is a funny one. Originally a 13th century Gothic church it was enlarged in around 1450 by architect Leon Battista Alberti. But rather than being built for the glory of God the decoration suggests it was built for the glory of Sigismondo Pandolfo Malatesta, the local bigwig who commissioned its reconstruction. This was a man with a well-developed sense of his own importance. Not content with embellishing the walls with his star sign, family initials, colours and symbols, he even employed acclaimed mathematician and artist Piero della Francesca to paint him. The fresco has been moved from its original position but though worn and tired is still in the church. It’s a saint and donor piece in which Sig couldn’t resist being the central focus of the picture. He’s bigger than the saint, who is only included as he shares the same unusual name. A crucifix by Giotto enlightens the gloom in the apse, hanging in the careless here’s-another-masterpiece way that things do in Italy. 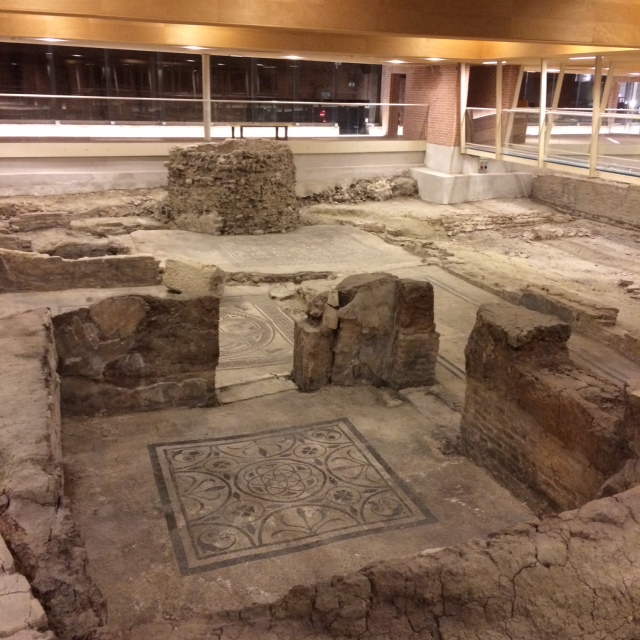 Recent (well, 1990s) excavations have discovered the remains of two 2nd century AD houses near the centre of Rimini. A fire caused the buildings’ roofs to collapse, entombing the contents for archaeologists to stumble upon two millennia later. An excellent glass and wood building has been built on top of the remains with walkways suspended above the ruins so that you can get up close and personal to the mosaics and low walls. A collection of medical equipment was found inside the ruins, suggesting that one of the houses belonged to a surgeon. His weapons, instruments have been preserved in the nearby City Museum.

As local Italian museums go this is a pleasant experience. There are not room after room stuffed with identical pots – a display technique designed more to bore you to death than inform or enlighten. The surgeon’s implements found in the house nearby are welded together but enough remains to show that if the disease that drove you to the surgeon didn’t kill you then the surgeon himself probably would. The Romans were undoubtedly advanced in many areas – underfloor heating was well ahead of its time – but modern medicine is a definite improvement *pops a pill*. The 14th century was the golden period for Riminese art, the town developing its own school following the ideals of Giotto. Rooms at the museum include a mix of such paintings, other items including actual clothes that Sigismondo wore and big names such as Bellini.

In England when buildings are 1000 years old we think they’re getting on a bit. But Rimini has a bridge that last year celebrated its 2000th birthday. It’s just too young for Julius Caesar to have walked over it, but it is still in use for pedestrians and vehicles. Those well-known bad guys the Germans* tried to blow it up in 1944 but couldn’t destroy it. It remains as an impressive demonstration of Roman engineering.

A town mentioned in Dante’s Divine Comedy, it contains an impressive fortress teetering on the rocks above the Marecchia Valley. Its origins are Roman, though its current design dates from the Renaissance, when it was regarded as one of the best examples of military architecture. Machiavelli describes it as ‘one of the greatest in the world’ and it appears in one of Vasari’s frescoes in the Palazzo Vecchio in Florence. 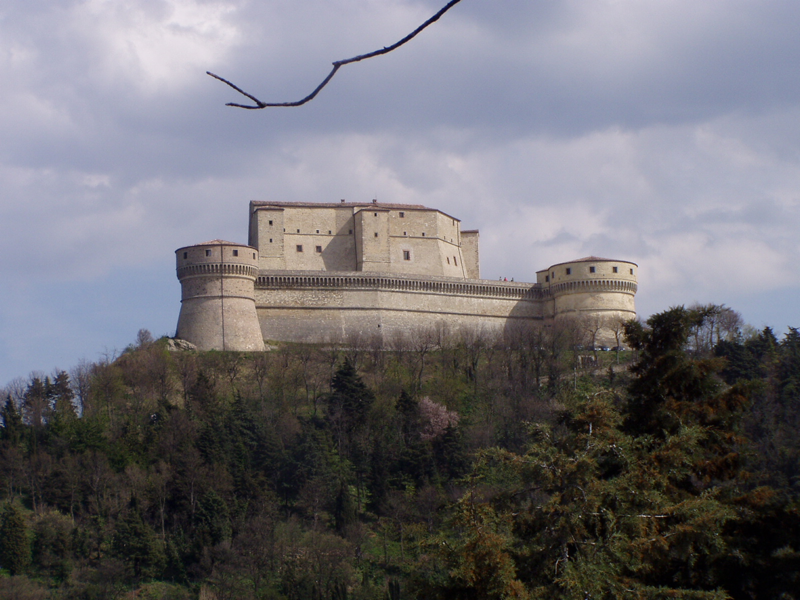 Its severe walls rise directly out of the rock. Recently refurbished, the castle is in good condition with roofs, whitewashed walls and dizzying views. Alessandro Cagliostro (Who? An alchemist who may have been mixed up in Marie Antoinette’s Affair of the Diamond Necklace. What? A complicated saga of impersonation, deception and a necklace worth 2 million livres) was imprisoned here by the Inquisition. Admirers still visit and lay flowers in his prison cell – from which there was no escape. It had no door, a barred window high in a tower and the only entry point was a hole in the ceiling.

There might be 15km of beaches to lounge on in Rimini, but you will find entertainment and interest whenever you go. And of course, this is where many Italians go for their holiday, so you should be able to find a good lasagna.

More details about the area

*That’s all in the past, forgive and forget, etc, etc

An app on the Terre di Piero for both iPhone and Android can be downloaded from itunes App Store or Google Play, containing information on the artists, his works, locations and associated events. There are regular flights to Bologna with easyJet and British Airways from London Gatwick, and Ryanair from Stansted, Manchester, Bristol, Edinburgh and Dublin. A double room at the Villa Adriatica in Rimini starts from €54 per night on a room only basis.