Los Angeles based theatre group Cloud Eye Control have developed 3 short theatre pieces that involve animation, motion graphics and innovative use of projection and shadow. This is the American troupes first trip to the UK and it is part of the Manipulate Visual Theatre Festival at the Traverse Theatre in Edinburgh.

The first performance is called Final Space and involves projected animation, in which a female dancer, known as Ina, interacts with the visuals. The visuals themselves are bright and colourful and change throughout the performance with dreamlike qualities. The performer stands behind a screen and is taken through a futuristic cityscape while her shadow reacts and interacts to emphasise the surreal nature of dreams. A subtle electro-pop soundtrack augments the performance and highlights the light emotion and bold visuals as Ina comes one with the animation.

The second performance in the series – Ocean Flight, changes the tone, and creates a downbeat and grey performance that retells the story of Charles Lindberg’s trans-Atlantic flight. To the back of stage is again a screen, but to the side of the stage one of the Cloud Eye Control performers stands. She is filmed and her image is projected on the back screen. The performer then begins to walk on the spot with gusto and enthusiasm, and now the innovation and majesty of the performance comes alive. A second performer holds up a blank white board in front to the projector and moves it across the stage. On the board we can see our walking performer being projected and appearing to be walking along with the board. This innovative use of real time motion graphics and effects is thoroughly mesmerising, as it captures the audience and leaves us guessing to where the projection is going to walk to next. This, along with a thumping soundtrack, creates an intriguing and involving piece that is all about the perception of movement and ways in which this can be presented live on stage. 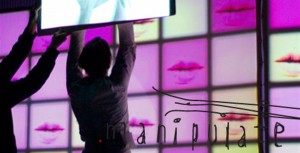 The third and final piece, Myth and Infrastructure, was a science fiction musical performance that looked like a typical b-movie and again made use of projection. Told through an electro-pop song, we are taken on sci-fi journey with a mixture of animated and live action visuals. By far the weakest of the three it was also the most energetic and exuberate with our solo performer expressing herself with confidence in voice and actions. The retro science fiction theme, although fitting to the performance, did not make it stand out in the context of the other two performances in the spectrum and also the Manipulate Visual Theatre Festival as a whole. That is not saying Myth and Infrastructure was not a bad performance it just lacked the experimentation and original approach that was on offer in the previous performances.