Combining Live Action and CG Animation, and taking major influence from Japanese monster movies, such as Godzilla, Big Man Japan was the final film screening at the Manipulate Visual Arts Festival at the Traverse Theatre in Edinburgh. Showing in conjunction with Scotland Loves Animation (an organisation promoting Japanese animation in Scotland and founders of the Scotland Loves Anime festival) Big Man Japan was a super hero comedy story from Director and popular Japanese comedian Hiroshi Matsumoto. 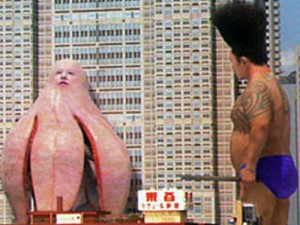 Told as a mockumentary we follow the middle aged Daisato around Japan as he tackles large monsters which terrorise the city. Daisato has to be zapped with electricity to make himself 100 feet tall so he can fight and defeat the monsters in typical Godzilla style.

The mockumentary approach works well and the film is at its strongest when we see the domestic life of our protagonist as opposed to the battles he undertakes in his professional life.

The film is also augmented with archive footage of Daisato’s ancestors. The role of protector to the people used to be a prestigious one, but now these extra-large super heroes are not on the front pages. Instead they have taken to offering Daisato’s extra-large body to advertising posters and have reduced televised fights to the late, late, late night slot. Despite this Daisato endeavours to fight. The monsters include a large grotesque eye on a foot, a horrible monster that gives off a horrific smell and an impish devil.

The conclusion to the story is bizarre and somewhat non-sequitor. Several super hero assists our protagonist by helping him beast up a monster. This comes out of the blue and is there to offer a bizarre and fun filled conclusion, but does distract from Daisato’s personal story. 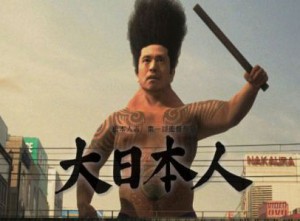 Overall Big Man Japan is a comedy with a difference. The fight sequences with the monsters are animated in a realistic CG style that is not jarring and sits well next to the mockumetary footage.