‘The 911 is the only car that you can drive from an African safari to Le Mans, then to the theatre and onto the streets of New York’

2013 is the fiftieth anniversary of the production of the first Porsche 911. The series has been constantly enhanced since its debut in the year 1963. However, the unique character of the model, renamed 911 in 1964, has always been preserved. Each of the seven generations has written its own individual success story. More than 820,000 units of the 911 have been produced in Stuttgart-Zuffenhausen since 1963. 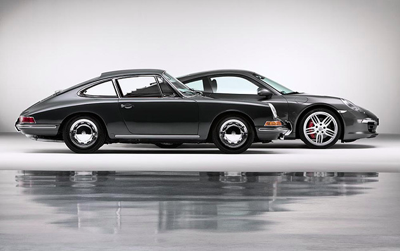 More than 300 books have been written about the 911 and new volumes are added each year. The Porsche 911 is unique in the automotive world. Like no other vehicle, it combines apparent opposites such as sportiness and everyday usability, tradition and innovation, exclusiveness and social acceptability, design and functionality. Ferry Porsche described the exceptional versatility of his masterpiece to a tee. “The 911 is the only car that you can drive from an African safari to Le Mans, then to the theatre and onto the streets of New York.”

Irrespective of which 911 generation you are in, the familiar 911 feeling sets in immediately. The driver is greeted by five round instruments which can be seen from the ergonomically perfect sitting position. The low bonnet is framed by two distinctive wings, allowing the apex of every bend to be aimed at perfectly. The ignition, which starts up the six-cylinder engine at the rear, is on the left of the steering wheel. Even from a distance, fans recognise the 911 by the acoustic heartbeat of its engine which gives each generation its very typical, characteristic sound.

Whether it is air or water-cooled, the lively flat engine has always been the heart of the 911. A unique sound coupled with the powerful thrust of the rear engine creates a union that is without precedent in the world of the automobile. And there is no need for the driver to have a guilty conscience as the 911 has always been a pioneer in terms of consumption and emissions. The reliability of the Porsche flat engine is also legendary in sports car circles and it plays an important role in the everyday usability and long life of the 911. It is no coincidence that two thirds of all Porsche cars ever constructed are still on the road today. Even sports cars can be enduring and combine prudence and passion.

The Porsche 911 evokes emotions in owners and fans like virtually no other sports car.  Whether it is an original 911 or a new car – a Porsche 911 thrills people all over the world. In the midst of automotive uniformity, it swims against the tide; it has always been different to other cars and it therefore generates a great deal of affinity. It is the whole 911 package that fascinates. A sports car with perfect design, powerful, efficient and robust engines, a vehicle concept that is totally committed to fast, precise driving, with various characteristics directly inherited from motor racing and its rich history – it is a treat for all the senses. Owning and driving the car is a very special experience. And this has been the case for 50 years.

Numerous well-known artists, actors, fashion designers, sportsmen/women and entrepreneurs throughout the world have become enthusiastic 911 drivers, some of whom have remained faithful to the sports car series for many decades. And the Porsche 911 has also made many appearances in films and on TV. In 1970, Steve McQueen, as leading actor and co-producer, paid a resounding tribute to the 911 with his movie masterpiece “Le Mans”. Almost the only thing on the screen for the first few minutes is the actor’s dark green 911 S.