A new group called The Oxfordians brings unabashed bohemianism back to Oxford. Not unexpectedly, these artists draw their inspiration from the sensual glamour found in the art of Dante Gabriel Rossetti and his colleagues in the notorious Pre-Raphaelite Brotherhood. 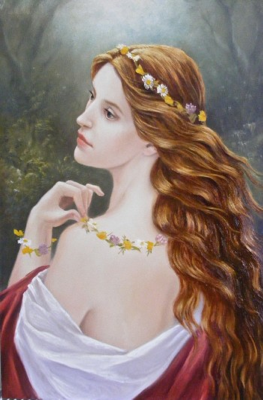 The group centres on artists George Oak and Bethany Meyer, each of whom takes a different message from their artistic heroes. Oak’s work will strike a chord with anyone who’s seen the work of Rossetti: long red locks of hair and the delicate treatment of light welcome viewers into a world of unabashed sexuality. Meyer invites us into a world of equestrian elegance, her wild stallions cantering across rivers are a delight to behold.

“As an artist you can’t help but feel inspired when you look at the work of someone like Rossetti,” Oak says. Rossetti was famous for his often risqué relationships with the so-called “stunners” who modelled for him, including Elizabeth Siddal, Jane Morris, and the working-class Fanny Cornforth, whose introduction into educated society by the artist was seen as a shocking act of transgression.

Like the Pre-Raphaelites, so connected with drugs and alcohol, rumours are bound to fly around the Oxfordians. Oak in particular makes thinly -veiled references to having lived on the edge, before painting gave him a new focus. Whether it’s just the self-mythologising so beloved of rock’n’roll artists, or the real deal, viewers can decide for themselves.