Woman’s liberation and feminist movements have done a lot for woman’s rights, thus addressing the power imbalance between men and women. However there is at least one area, which in my opinion, still encapsulates the great power vacuum between men and women, and that is in the bedroom. What about the pill, contraception, the social acceptance of child birth out of wed-lock, abortion and casual sex; surely I’m missing something? No I am not. The apparent freedom women possess, to have sex with whomever they want and whenever they want is just that: an illusionary freedom, not a real one. Women are told by state and the media that they have never had it so good, they have all this freedom that they never had even thirty years ago, and that we should be grateful and thankful for this; a hundred years ago women didn’t even had the vote. Well girls, lift up your skirts and rejoice for this is the modern era of sexual equality! 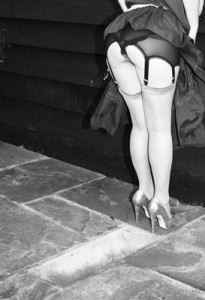 In the bedroom, women perceive that they are on equal footing with men, but this is façade. Women are expected to behave in a sexual manner and to want sex; this is evident from the way women are portrayed in the mainstream media and filters down from the media into the consciousness of everyday people, subtly objectifying women as objects of sexual desire and pleasure. This sexualisation of women not only re-enforces male objectification of women, but also normalizes it in the minds of both genders.

If a woman goes back to a male friend’s loft apartment after a hazy night out and he wants to have sex with her, does he expect it or desire it? Often a man takes it as a given that if a woman comes back to his apartment she will then be having sex with him, or least engaging in some sexual activity; what else would she be doing there? This is a discriminatory way to think because if one looks at the situation from this male-centered perspective and ignores the woman’s actual intentions, wishes, and motivations, at best this perspective places an expectation of sex upon her and, at its worst, an obligation. It is common place for a woman to find herself in a situation at the end of a night with a man, an acquaintance, a friend, a date, someone she’s just met, etc… where the man is expecting her to have sex with him, but she doesn’t want to. What had she ought to do? Say ‘no thanks’ and walk away, leaving the fella feeling a little disappointed- tail hanging between his legs? I find entertaining this option amusing since it is probably the least realistic outcome. In the real world the man will most likely try to persuade her that this is not the case and that she actually does want to have sex with him, she just didn’t realize it yet, but in ten or thirty minutes time she will be gagging for it! All one has to do is be persistent. Is this really legitimate behaviour? It’s perfectly normal behaviour which goes mainly without questioning; if a woman has been persuaded into consenting to sex, can this be considered a true autonomous choice? Why is it considered normal and legitimate for men to talk a women into to having sex? But surely if she really doesn’t want to have sex, she’ll just keep on saying no; she wouldn’t change her mind. Again this male orientated  way to look at things ignores the pressure placed on a woman to say yes not only by the man in the situation but also by society, a society in which women are presumed to be having lots of sex and told that they should want to have lots of sex. Sometimes it takes a more confident, self-assured and stronger woman to say no than it does to say yes. The point I’m trying to make is that in the bedroom, the imbalance of power between men and woman still exists with women pressurised into compliance.

Women are lead to believe they have freedom in the bedroom, but it’s simply an illusion; real sexual equality in the bedroom doesn’t come from more women having more sex but from more men listening to  and respecting a woman when she says no the first time. When this situation arises, where a woman knows she only has to say ‘no thank you’ once,  we’ll be on the way to real sexual equality.

11 Comments on Reading Between The Sheets: The Illusion of Sexual Equality in The Bedroom