As I was perusing the newspaper stands on Sunday, 20th May 2012, I spotted the front cover of the Mail on Sunday’s ‘Live’ magazine: 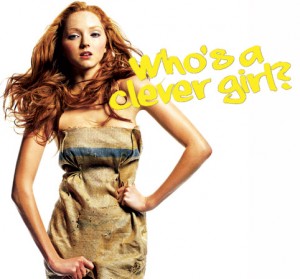 Lily Cole, a high-profile English model and actress, has earned a double first degree from Cambridge University. Rather than address Cole as the clever, mature adult that she is, the Mail instead addresses her as one might a dog that’s just perfected a new trick: “Who’s a clever girl?”

It is worth noting that of the gargantuan pack of Mail on Sunday-supplements, the ‘Live’ magazine is the one targeted towards male readers,with ‘You’ being for women (see the Mail on Sunday advert here.)

Upon reading the article (phrased as an interview, by Martyn Palmer), I found that Cole’s degree is quickly brushed over in favour of paragraphs on her modelling and acting experiences, with the two penultimate paragraphs wrapping up with her relationship status and her desire to have children.

So, yet again, a woman who is both beautiful and clever is too much for (some) people to cope with, and her brilliant academic achievements are quickly dismissed in favour of her properly-feminine roles of being-looked-at and wife/mother. Palmer opens his article with seven solid lines outlining Cole’s physical appearance, firmly undermining any hope that her intellectual capabilities might rate higher than her role as object d’art. Furthermore, while the article does include information on Cole’s charity work, it only focuses on her role as an ambassador for The Body Shop, making it acceptable for women to talk business when in relation to feminine shops, and policy when it is crouched in language of maternal-care for third-world communities.

Additionally, the section that explores her experiences of childhood bullying focuses solely on her looks. The article is structured thus: she was bullied for her looks, she’s made a career on her looks, she’s famous for her looks and we should all admire her for her looks, the result of which being that Cole is reduced to the sum total of her looks. Even her latest acting role is described as ‘small but perfectly formed’, not-so-subtly connecting her identity as actor with her physical appearance. For an article advertised as being about how ‘Lily Cole reveals how she left the catwalk behind to get a double first from Cambridge’ it is significant that the majority of the four-page spread concentrates on her modelling career, with one page being entirely dedicated to a photo of her face, and her studies being reduced to one anecdote about how she once marshalled her thoughts, which insidiously undermines her outstanding achievement by implying that all one needs to do to be awarded a double first from Cambridge is make a pretty collage of quotes.

Palmer’s assertion that ‘Ms Cole has always, and I suspect always will, defy stereotypes’ is proved false and hypocritical as his article repeatedly dismisses her education, philanthropy, understanding of capitalist business structures and pursuits as art historian and actor to concentrate on her appearance. Cole is clearly a complicated, multi-talented, interesting individual with a great many skills and passions, but Palmer insists on writing her as his ‘stereotypical model’, and reduces this accomplished, experienced, intelligent woman to a ‘girl’.

This article is not about how Cole ‘left the catwalk behind to get a double first from Cambridge’: it is about putting Cole firmly back in front of a camera lens (be it photo or film) for the enjoyment of an audience (a male audience, given the targeted readership of this publication). Indeed, the patronising misogyny of the front-page headline ‘Who’s a clever girl?’ reminds me uncomfortably of Dr. Johnson’s famous pronouncement in the eighteenth-century that “a woman preaching is like a dog walking on its hind legs, it is not done well; but you are surprised to find it done at all.” Palmer’s article barely touches on Cole’s degree, and doesn’t acknowledge at all the enormity of the degree being a double first from Cambridge. The noteworthy fact is that Cole bothered to pursue a degree when she’s so beautiful: pretty girls don’t need to be smart girls. Therefore, Cole’s degree is peculiar, and consequently threatening, to the gendered binaries in which the Mail operates, and so must be undermined and dismissed in favour of firmly re-casting her as a passive object to be looked at and enjoyed, rather than the intelligent, ambitious and determined woman that she actually is.

6 Comments on Beauty & Brains: still an impossible concept (in a woman)