The Philadelphia Museum of Art is one of the world’s great museums, housing thousands of works of art in a huge neo-classical building at the end of the Benjamin Franklin Parkway.  With an impressive collection of paintings from all periods, the museum also shows the early influence of the Victoria & Albert museum in London, including in its collections the best examples of craftsmanship and a devotion to the ‘useful’ as well as the ‘fine’ arts.

Now the Art after 5 program means the museum remains open until 8.45pm on Fridays with a series of live performances and fun snack and supper options. You can sip a cocktail whilst listening to the music, and then head into the galleries for an evening stroll around some of the greatest works of art in the United States. There are also collections of decorative arts including cabinets of ethereal coloured glass. 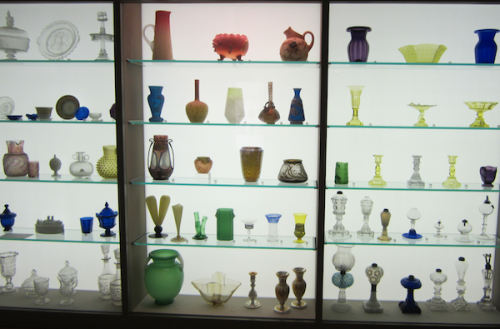 Thanks mainly to Carroll Tyson Jr. the museum has a stunning collection of Impressionist and Post-Impressionist paintings. The 19th Century French collection is one of the most important in the country, including great pieces by Cezanne, Renoir and Monet. Manet is represented by portraits in his sweeping, gestural style, but also by a painting from 1864 entitled The battle of the Kearsage and the Alabama.

This was a naval engagement in the American Civil War that took place near Cherbourg, France. The battle ended with the sinking of the Confederate Alabama, the moment that Manet chooses to depict. This denouement took place within view of huge crowds who watched from the banks and from small boats. Manet’s picture is an early form of the now ubiquitous news image. The final picture was being shown in the window of a Paris gallery within a month of the battle, Manet having been one of the sightseers who knew a one-off event when they saw one.

The museum has one of the versions of Van Gogh’s classic work Sunflowers. However the late period Van Gogh is most clearly represented by Rain, a stark, bitter landscape lashed by violent rain that comes close to bringing the pain of his existence onto canvas. Most people know Van Gogh’s story and this painting is from 1889, the difficult last months of his life. He was already in a sanatorium near Arles and he painted this view from his room at the clinic many times. The colours are not bright and life-affirming but pale and weak, as though – with the 20:20 vision of hindsight – life is draining from Van Gogh’s palette.

The slashing lines of rain etched onto the canvas convey a turmoil that gives the image an intensity that combined with our knowledge of the artist’s future belies the simple outdoor scene.

An evening at the museum can easily be whiled away looking at masterpieces in any of the many galleries which include Asian art, European decorative arts, textiles, armour, prints, drawings and photography, sculpture, European and American art. The department of 20th century art was established in 1971 and has acquired an impressive collection of modern art which includes seminal works by Jasper Johns, Andy Warhol and Marcel Duchamp.

The holdings are based on the gifts of A.E.Gallatin and Louise and Walter Arensberg – who were advised by their friend Marcel Duchamp. It is particularly strong in works by Picasso, Brancusi and Miro, although also has many works by Monet, Pisarro and many others.

The museum houses the most inclusive collections of Duchamp’s work in the world,

1936 is a typically precise rendering of the images of his unconscious. An unpleasant, humanoid yet monstrous creation grimaces as it attacks itself, the beautiful Spanish sky untroubled overhead. The pain in the picture is all man-made, whilst the countryside around is left untended.

A Munch mermaid sits high in the entablature of a gallery. Painted in 1896 it was his first decorative piece, designed to fit under the roof in the Lysaker house of Norwegian collector Axel Heiberg. Using a darkened palette Munch is investigating themes that would develop in his work concerning change, sexuality and fear.

The modern collection has many star pieces, including a Bruce Nauman neon piece entitled ‘The true artist helps the world by revealing mystic truths’ that sits low on one of the gallery walls. Inspired by a neon beer advertisement, Nauman originally hung this piece in the window of his studio, which had previously been a local shop. Subverting a means of communication, replacing an advert with an artistic statement Nauman reminds the viewer of the ubiquity of commercialism and the necessity of questioning everything visual.

The Museum holds over 227,000 pieces so it may be hard to see everything in one visit. However the museum is open Tuesday to Sunday 10.00 -5.00pm (Fridays until 8.45pm) so there is plenty of time to head back in and see some more.