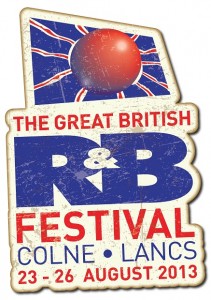 The Great British R&B Festival  sees hundreds of artists performing on three main stages and seven other ‘roadhouse’ venues over four days.  Held in Colne, Lancashire it is now one of the premier rhythm blues festivals in both the UK and mainland Europe.

Furthermore, this year it will also host the British Blues Awards. The awards recognise the best of Blues music, musicians, and festivals in 15 different categories. The awards will be presented on the British Stage on the Sunday afternoon. Many f the nominees are appearing over the weekend.

So lets’ look at some of what’s on. Well for starters on the International Stage will be Bill Wyman and his Rhythm Kings, Ginger Baker’s Jazz Confusion and the Elliott Randall New York All Stars.

Elliott has recorded and performed with artists as diverse as The Doobie Brothers, Carly Simon, Seatrain, The Blues Brothers, Carl Wilson, Peter Wolf among many others, with his ‘finest hour’ being a guitar solo on Steely Dan’s ‘Reelin’ in the Years’.

Other International Stage highlights this year come in the form of  Lil’ Jimmy Reed, Steve Phillips & The Rough Diamonds, Paul Lamb &The King Snakes, The Swing Commanders, The Jive Aces, Ian Siegal, King King and the Climax Blues Band, The Chas Hodges Band and Chris Farlowe & The Norman Beaker Band. Nine Below Zero, Dr Feelgood, and The Pretty Things are also back to astound audiences with their coruscating rhythm and blues.

A late addition to Monday’s line-up   is the enduring and incredible Wilko Johnson who despite his terminal cancer is ‘feeling again the desire to get up on stage…while health allows.’

Babajack also appeared at The Great British Folk Festival in 2012 and I reported that they had an ‘intense mix of blues, roots, and folk. Becky Tate’s Cajon (box drum) and   Trevor Steger’s semi-acoustic ‘wine box’ guitar invoked a past era of raw and unpolished blues and roots. Not for the faint hearted.’ So definitely an act to catch. They are also nominees in the awards both as a band in the acoustic category and Becky Tate in the ‘Instrumentalist’ category

This is only an overview of what looks like another great festival. It is certainly wide ranging. Organiser, Alison Goode, says ‘Every year we try to cater for all musical tastes and again, we are really excited by the line-up we have already secured.’ Can’t argue with that.

For more festival  information, tickets and so on visit the official website.