In England we treat swimming pools shabbily. Snatched from the sunlight we force them to languish inside buildings. Open during the day, they are cruelly shut in the evening when life really begins. Not so in Zurich where swimming pools are an important part of the city’s nightlife. Not since the glory days of ancient Rome have baths been such an integral part of society. The pools are outside in the sunshine and when the day’s swimming is over they are transformed into Badi-bars or outdoor clubs. The world has seen nothing like it since the 6th century, when the Ostrogoths destroyed the Baths of Caracalla. Nero or Caligula might find badi-bars too chilled, but to a travelling Englishman they are the very height of Aqua-urban chic. 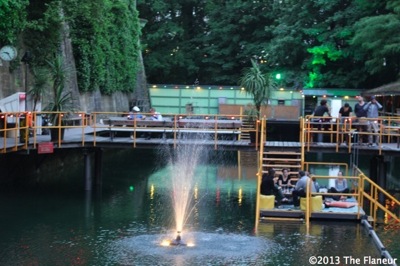 Rimini is the archetypal Zurich swimming pool/club, the exemplar that shows the world how it should be done. I’d love to open something similar in England, but the vital ingredient that makes the whole premise sing is sunny weather. (No one has ever said, I do love London, but it’s just a bit too hot.) At Rimini I sat outside listening to the fountain, sipping a peppered Gin and Tonic (I was sipping the G&T, not the fountain). The owner Marc Blickenstorfer told me how it had grown since 1998 when it opened with a couple of fridges and a grill. Back in the day Rimini served self-grill sausages with the aim that people met over the barbecue. No doubt you can tell a lot about people by how they like their meat.  A nice idea, but unfortunately impractical, so now you can get pizza – cooked just for you.

We’d started the night at Frau Gerolds Garten, a bohemian complex with a Berliny atmosphere and an urban garden in the trendy Kreis 5 district. Originally built from shipping containers in an old industrial area the designers have imported flowers and plants but kept the industrial vibe alive – horticultural containers are deliberately chosen because they will rust, a raised terrace has been added to catch the sun and give a great view of the railway. A large area is given over to plants and locals look after the different containers where vegetables and herbs are grown for the kitchen. Original large-scale art covers the walls, there is a gin bar for aficionados of mother’s ruin and live music plays as people chat and relax. 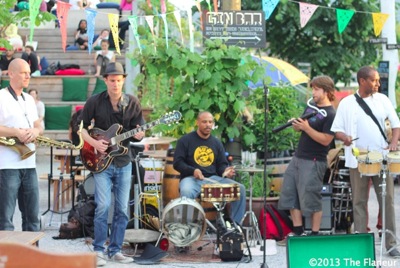 Frau Gerolds Garten has the sort of bohemian vibe you’re probably looking for – and if you’re not, you really should be. The gin and tonics have to be tasted, although so do the strawberry margaritas. Grab one of each, sit on the raised terrace and enjoy the evening sun. It’s the sort of place that Niko from the German film Oh Boy would have loved.

Next stop was another Badi Bar, this time the Seebad Enge. Again it is a swimming pool during the day, although if you look closely there is no base to the pool – the structure is just floating over Lake Zurich. A venue for acoustic concerts, there is a flat area where people relax on cushions. There are views out over the lake, although when we visited it was Zuri Fascht and the sky was full of fireworks. 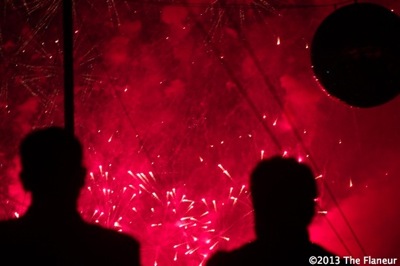 It was here that I made a shocking discovery. Hendrick’s gin is not an 18th century drink. Hogarth wasn’t targeting it in his Gin Lane etching. I have fallen for the marketing and the fact it is sold in a replica apothecary bottle. Mark knows a bit about gins and he assured me that it had only been sold since 1999. It was one of those moments that makes you doubt everything, makes you wonder who you can trust. Hendricks, that I thought had existed since time immemorial, that I assumed Oscar Wilde had sipped as he penned his latest comedy, is just a modern pretender, younger than the wine in a well stocked cellar. I had to have a glass of Prosecco to take away the shock.

After watching the fireworks we walked south around the lake to Quai 61. There was a pumping temporary dance floor in the grounds, whilst inside on the ground floor was an elegant restaurant. It was late and I had had a couple of G&Ts, but the whole place seemed to be designed like a ship, and built out of riveted metal. I may have invented that fact though, please don’t plan an entire trip to Zurich based on a desire to see Quai 61, you know, the one The Flaneur said is designed like a ship. if you have any evidence that it is, please leave a comment.

If you’re looking for a good night out then give this club crawl a go. It’s enough to make you want to move to Zurich.

1 Comment on The great Zurich club crawl: Badi-bars or where to party in Switzerland’s biggest city