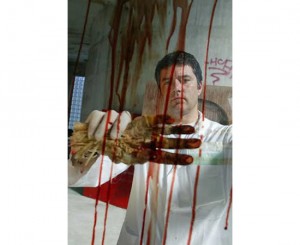 A sick joke is what many will say of Morten Viskum’s work and, if this is their opinion then so be it, however I would like to take the time to say a few words to the many. This article will try and communicate the ideas I had had for what would have originally been a solo presentation of Morten’s piece ‘The Hand That Never Stopped Painting XXVIII’. Why this particular one amongst the series? Simply because it was the most striking to me but the ideas I will shortly layout apply to every work in the series just as validly. The proposed exhibition would have balanced the response to Morten’s work by putting forward a theory to rescue the painting from being seen purely as macabre. First of all the exhibition would defend the visceral form of Morten’s message. Death is, understandably, a historical issue one that has been covered on innumerable occasions and because of this the artist was obliged to present this ancient act in something different and daring.

Most basically the exhibition would have drawn attention to the aesthetic delights of the work-there is an evident exuberance to the brushstrokes and palette with a full range of vivid streaks. We can still appreciate the painting’s appearance independently from the queasy story behind it’s production. I enjoyed charting the collaboration between the eager hand and mind as their movements fill the hypnotic surface. It was this restless movement that started me thinking that the hand used for this could represent every hand of every artist whose efforts, great or small good or bad, cannot be quashed. Therefore the hand moves in a frenzy across the painting’s surface as the historic, collective hand moves back and forth and across time.

This restless energy lies at the crux of my argument that this work is so much more than a shock tactic. I believe that not only does it involve organic residue, in the hand itself, but profound creative residue which remains inside us and which is usually condemned to tragically rot away to nothing. Instead a living creative intervened and was able to extract more of that potential manipulating the creative possibilities of the dead. Much like an organ donor will provide useful assistance to the medical community here the owner of the severed hand assumes the role of ‘creative donor’, offering up his body to the cause of art and its continuing innovation. So the creative donor is key if the artist is to expand this restlessness out beyond the supposed limits of life and partake in the glorious act of inventive revival. The exhibition would have displayed the painting as being utterly opposed to the notion of waste. Much like various indigenous peoples who utilize all parts of a hunted beast Morten’s painting is not some bizarre treatment of the human body but actually honours it. In my eyes this justifies the work against any ethical questioning it may face.

I shall conclude by illustrating two other possible readings of the painting. By adopting a severed hand as a practical paintbrush Morten grants the hand a new lease of life. All of this suggests that the artist can, if he chooses to, refuse to accept that death is the end of things. This spiritual slant on the work has ramifications for us all. Through direct exposure of our anxieties we stand a better chance of mitigating them. Though entire success is almost certainly impossible a confrontation of our ultimate fear, death, we can seek to purge this fear of our irrationality.  Both technical approach and curatorial approach had been suited for each other. With the hand severed from the body it is isolated, out of place but not without it’s own particular and powerful purposes. The design of the exhibition would also have been a presentation estranged from familiar structure. I imagined the painting being ‘toured’ around a variety of venues thus the restless painting would have been severed from the gallery, or the ‘body’ of curation. Importantly the hand thrived once separated from it’s body and I believe the painting would have also thrived when separated from the gallery. Whether behind white walls or as part of several freed movements the real sick joke would be to only consider this inspiring collection of paintings a sick joke.

1 Comment on The Hand That Never Stopped Painting XXVIII