Ninja Scroll is a classic anime film and along with Akira and Ghost in the Shell, one of the major forces in bringing Japanese animation to English Language audiences.

First released in 1993 by Madhouse Studios and directed by Yoshiaki Kawajiri (Wicked City, Vampire Hunter D: Bloodlust) Ninja Scroll is an epic fantasy that is set in Feudal Japan. After almost twenty years since its Japanese release, the anime does not look dated, with excellent character designs and fantastic animation bringing these characters to life. What makes Ninja Scroll standout is the background and layout design. We are taken to a sparse Japanese landscape that at times is claustrophobic and always intimidating.

The story of Ninja Scroll is somewhat linear. We follow the character Jubei as he pursues a journey to bring down his former nemesis. Throughout this passage we are presented with a series of demons that attempt to thwart Jubei in his task.

Ninja Scroll could be regarded as a typical anime. Gore, violence and sex is present, however these elements do not overshadow the brilliant designs and finely paced, but distinctive narrative. A violent and theatrical ending is fitting and leaves the viewer feeling that they have indeed witnessed a masterfully told story.

Ninja Scroll is defiantly a movie, which could be recommended to newcomers to anime as it is a perfect introduction. The screening at Scotland Loves Anime was the dubbed version and this did not take anything away from the movie. The voice acting was fitting, but it would have been nice to have seen the Japanese Language version on the big screen, especially at cinema one in the Edinburgh Filmhouse. 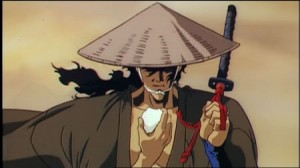