How would you like to be remembered as a great artist, but under a name that was not your own? Thanks to Renaissance writer and painter Georgio Vasari that is what has happened to Tuscan artist Piero della Francesca. He was christened Piero, but he wasn’t a della Francesca at all. Vasari invented the name in his sixteenth century blockbuster The Lives of the Artists (still available from all good book stores

). All Vasari needed to have done was type into Google Piero Artist Sansepolcro and he’d have found out that Piero was really called Piero di Benedetto de’ Franchesi yet signed his pictures Petrus de Burgo.

Nevertheless Piero has found fame and the Italian area where he lived and worked for much of his life has recently created a trail to give visitors a deeper understanding of his works and show the links between the paintings and the local views. Two academics have researched the actual locations of the backgrounds in some of his paintings, so you can now visit Emilia Romagna and surrounding Italian counties and flit between his paintings and the actual landscapes where he painted.

The trail begins in Rimini and heads off to Urbino, Sansepolcro, Monterchi, Arezzo and Perugia. Each of these has different Piero treasures on offer, from full-blown frescoed walls to smaller works. But think not that bigger means better. The frescoes of the True Cross in Arezzo are large (see here for a previous Flaneur trip to see these images), but to properly appreciate them you’ll need a very flexible neck or a special flip-top head. It is a much smaller picture in the Ducal Palace in Urbino that famed critic Kenneth Clarke described most glowingly, enthusing about The Flagellation as ‘the greatest small painting in the world’. 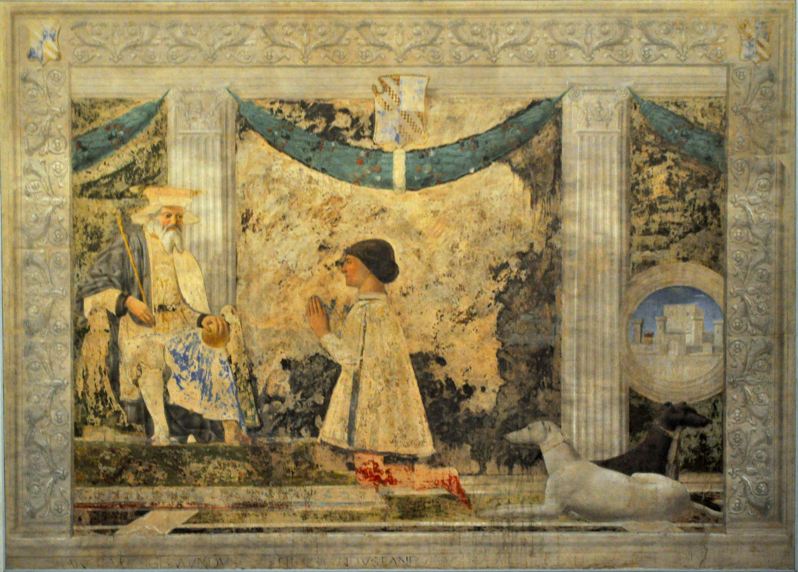 But first to Rimini, which has a Petrus de Burgo, I mean Piero della Francesca, fresco in its Malatesta temple. Unfortunately it is tired and painted as a piece of propaganda. In a church that already celebrates local Renaissance lord Sigismondo Pandolfo Malatesta to a distasteful degree, Piero has added a fresco entitled Sigismondo Pandolfo Malatesta kneeling before St. Sigismondo. Malatesta is the centre of the painting, though given the weighty self-regard Malatesta appears to have had we should be grateful that the saint isn’t the one doing the bowing. It’s sad to see that Piero wasn’t just a humanist genius, getting out of bed to write treatises, win crossbow competitions and invent perspective, but was also a brush for hire. Presumably megalomaniacs pay well.

Since being painted in 1451 this fresco has suffered from over zealous cleaning. It turns out that most Pieros have deteriorated since their creation as his technique was experimental and hasn’t lasted well. He combines true frescoing (where the pigment mixes with the fresco, (i.e. fresh) plaster and actually becomes part of the wall) with ladding around at the top of a ladder with a hog-hair brush and some tempura. The tempura, mixed from pigment and egg yolk is unstable and has not survived well – soapy 19th century cleanings not having helped. The combination of materials and overzealous maintenance has contributed to destruction of much of the detail.

Nevertheless what remains shows an expert who is able to capture skin tones superbly. He has faults – don’t read this and drive straight to Rimini expecting utter perfection. His characters lack weight. On their own – from head to knee – they are superb representations of real humans. But they float in their surroundings. When Piero got to the feet and calves he seemed to give up all attempt at modelling. Or maybe he used tempura for those bits and the well-meaning spongers have destroyed it. As the paint disappeared beneath their hand there must have been an awful lot of restorers suddenly gulping and wondering what they were going to say to the owner of the fresco.

An app on the Terre di Piero for both iPhone and Android can be downloaded from itunes App Store or Google Play, containing information on the artists, his works, locations and associated events. There are regular flights to Bologna with easyJet and British Airways from London Gatwick, and Ryanair from Stansted, Manchester, Bristol, Edinburgh and Dublin. A double room at the Villa Adriatica in Rimini starts from €54 per night on a room only basis.