Onward to the UNESCO World Heritage Site of Urbino. It’s an attractive if hilly town that’s worth a wander, but if you’re on the Piero della Francesca trail you’ll be heading to the central Ducal Palace. Here are two of Piero’s smaller masterpieces.

The Madonna of Senigallia dates from the 1470s and is a strangely grey contemplative piece. The virgin demurely avoids your gaze, but one of her bodyguards, sorry, angels boldly stares you out, looking improbably like a footballer posing for his Panini sticker. Talk is that this is 15th century Italy’s riposte to the Arnolfini portrait in the National Gallery. Piero certainly matches van Eyck’s realism, the dusty light being particularly impressive, but he has painted types rather than individuals. A family of different glances, it demonstrates facility but doesn’t heave with atmosphere or a sense of importance. This is the son of God, but Piero has painted him as a pugilistic fellow, the Word most definitely made flesh and dwelling amongst us. 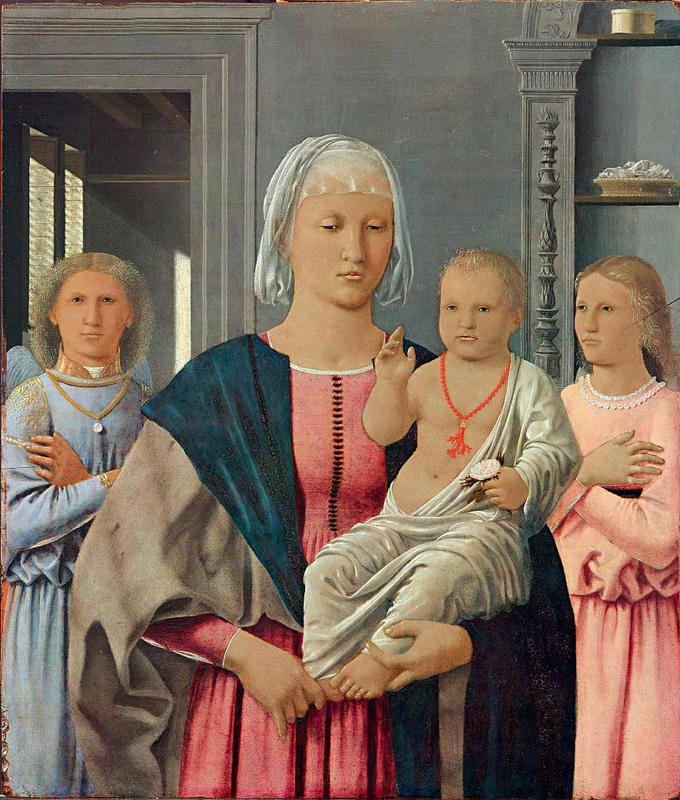 More interesting is the Flagellation on the other side of the same room. Here is painted such a confusion of happenings that you can stand for far too long trying to get a handle on what is going on. (So long – if you’re not careful – that you can’t go down to the shop and buy a book that tells you what is going on, because the bookshop unexpectedly closes fifteen minutes before the rest of the gallery). The image includes two separate scenes on the same piece of wood – Jesus about to be whipped on one side, and three seemingly unconnected Renaissance gentlemen on the other.

Though there is nothing enigmatic about being whipped, prepare to come across the word enigmatic when reading about this Flagellation. There are (I am assured) 75 theories about what is going on, though some of the theories I heard being bandied around should really have been closely followed with the phrase but of course that is nonsense. No one has a definitive explanation for what Piero has painted. Most popular is a theory identifying the three men as local dukes Federico, Oddantonio and Guid’Ubaldo. But Oddantonio died in mysterious circs in 1444 and Federico may well have been ‘involved’. 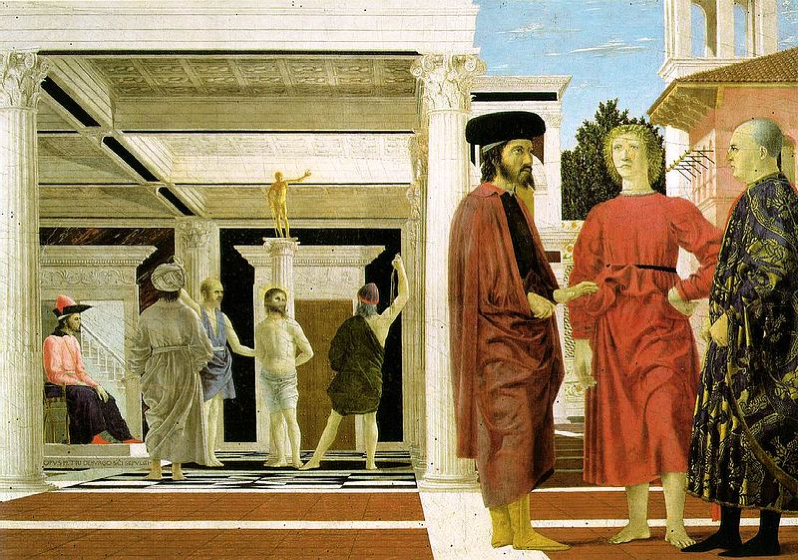 Would Federico da Montefeltro have brazenly commissioned a painting starring his murdered step-brother and dare to make a connection between Oddantionio and Christ? We have seen in Rimini that Piero painted what he was asked to paint with pretty much no questions asked, so it is possible, but if these are real men why are their expressions so blank, their interaction so limited? They stare rather than engage with each other, suggesting they could be representational – maybe of the divided Latin and Orthodox churches. If so the red-cloaked central fellow might be an angel – though the only real push in this direction is that his features are similar to those of Piero’s angels in other paintings.

Could the explanation be much more simple? Though in Renaissance garb the central red-cloaked blondie is imitating the position of Christ. Could he be a contemporary Christian suffering as Jesus did, albeit from more modern forms of flagellation – Eastern wealth and Western ‘wisdom’?

The identification of the three 15th century dandies is not the only issue Piero has left us. To the left Jesus is identified closely with a classical column and has a Roman sculpture perched above his head. Roman emperors were keen on such depictions of themselves – could this be an oblique critique of Jesus’s command to render unto Caesar the things that are Caesar’s? Or should we see the statue as a pagan idol in improbable triumph before Jesus’ resurrection?

The meaning of the picture has been lost, but nothing Piero painted was left to chance so the Flagellation encourages theorising and study. Leave a comment below to explain what you think the picture is about. Or head to Urbino, one of the most elegant towns in a country full of elegant towns and pick up the Piero della Francesca trail yourself.

Next stop Sansepolcro and Monterchi…coming soon

An app on the Terre di Piero for both iPhone and Android can be downloaded from itunes App Store or Google Play, containing information on the artists, his works, locations and associated events. There are regular flights to Bologna with easyJet and British Airways from London Gatwick, and Ryanair from Stansted, Manchester, Bristol, Edinburgh and Dublin. A double room at the Hotel San Domenico in Urbino starts from €128 per night on a bed and breakfast basis.  Urbino tourism