Isn’t it everyone’s dream to visit Cabaret Voltaire in Zurich? To walk along Spiegelgasse to Hugo Ball’s nightclub, following in the footsteps of Tristan Tzara, Jean Arp and the rest of the original Dada gang. More famous pilgrimages might lead to Santiago de Compostela, Rome or Mecca, but Cabaret Voltaire is a must see destination for everyone with an interest in anarcho-art, conceptual madness or general lunacy. 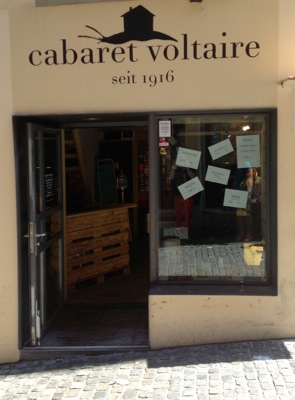 Founded in 1916 the Cabaret Voltaire was a meeting place in neutral Switzerland for a collection of intellectual refugees who were escaping the madness of the First World War. They rented the back room at Spiegelgasse 1 and announced they were creating a centre for artistic entertainment. It was an anything-goes type place featuring sound art and poetry readings as well as exhibitions of works by radical artists like Kandinsky and Ernst. Unusual costumes were de rigeur. 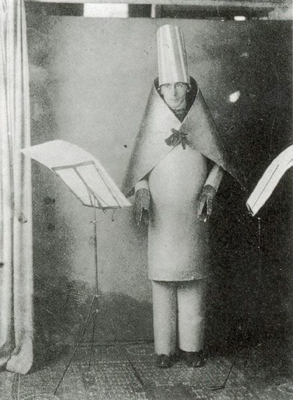 Hugo Ball performing at the Cabaret Voltaire in 1916

Today Cabaret Voltaire has been rescued from closure and is divided into sections. Downstairs there is an exhibition space and a shop selling neo-Dada items such as notebooks disguised as Cuban passports. There are also some delightfully Dada toilets… 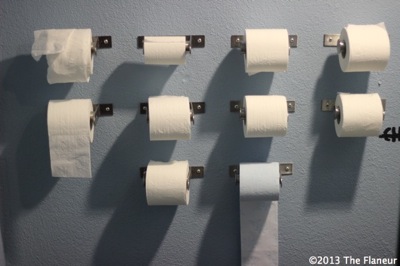 The exhibition room has a complicated constellation painted on the ceiling, showing the links between the different artists and the different locations of Dada, all spiralling out of Zurich. The exhibition is a selection of videos that explain Dada. They may or may not be extremely interesting, it was hard to tell as they were all in German. 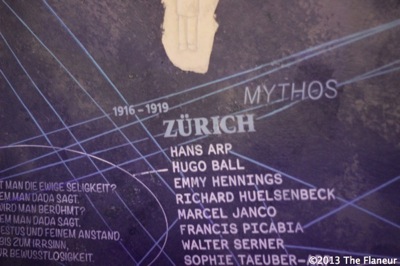 Upstairs there is a bar, and then as you walk further into the building you reach the famous back room where all the lunacy took place. Shabby chic, although tending more towards just shabby, the furniture is mixed and matched, a low stage at the far end where Ball would have read his verses without words...

When I visited all was quiet. I bought what I thought was a completely useless neo-Dada bottle opener. It was a bent nail in a piece of wood with a bottle-cap pre-attached, rendering it of no use. 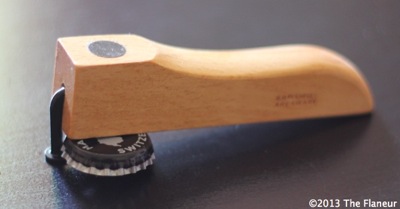 A perfect souvenir I thought. Unfortunately it turns out the bottle cap is cleverly attached magnetically to stop it falling on the floor, and the whole thing is actually useful! I don’t know what Tristan Tzara would have thought of that, although I suppose even Dadaists had to open beer bottles.

1 Comment on Cabaret Voltaire – The birthplace of #Zurich Dada still exists and I’ve been there!